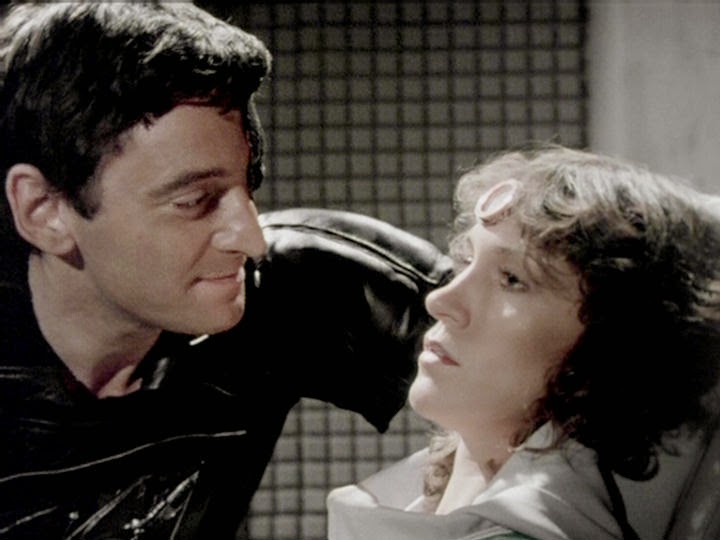 Blake's team infiltrate a Federation communications centre to steal a cypher machine, blowing up the facility as they go to prevent their theft from being discovered. There's only one problem: in the confusion of their escape Cally has been left behind. Meanwhile the Federation's Supreme Commander Servalan assigns the ruthless and uncompromising Space Commander Travis to track down Blake and stop his insurrection at any cost.

"Seek Locate Destroy" is a stunning episode, as far removed from "The Web" as could realistically be possible. It's well-paced and written, inventively directed, and most importantly of all it gives the series a firm and solid creative direction in which to proceed. For all intents and purposes this is like a second pilot episode. Terry Nation has stumbled through the past few episodes, taken a pause, and subtly retooled the series.

The opening 15 minutes are an excellent showcase of the regular cast, highlighting their respective personalities and skills. What is presented here is absolutely what sticks for the remainder of the series. Vila in particular gets a boost in character: in the first few episodes he's vacillated from being a shifty but clever thief to being a foolish coward, but here he's a careful blend of all of those elements ('There isn't a lock I can't open - if I'm scared enough').

There are some unexpectedly clever bits of direction in this early sequence as well, whether it's shooting a teleportation sequence from the point of view of the characters - they stay in shot, and the background shimmers and changes - or the super-imposition of a ticking bomb over Cally's desperate search to find her discarded teleport bracelet before it's too late. It's not a surprise that this episode's director, Vere Lorrimer, went on to become the series producer for season 4. He has a visible handle on the characters and is capable of drawing much better production values out of low budgets.

Once the raid is complete, and Cally apparently lost, the episode abruptly changes tack. It jumps to the Federation side of the story. The growing effect Blake's raids are having on the Federation are made clear, as is their insistence that his efforts be stopped immediately. This fleshes out the series immensely, and gives it a sense of balance. Rather than face off against a faceless, impossibly monolithic Federation, Blake now faces off against other people. In particular, against Servalan and Travis.

Servalan first: it's pretty well known among Blake's 7 enthusiasts that the role of the Federation's Supreme Commander, effectively the head of the military answerable only to the President, was written as a man. Producer David Maloney cast Jacqueline Pearce in the role, and she insisted the character should be dressed in aggressively feminine ways (the original plan was for a Star Wars-style military uniform). Critically, her dialogue never changed, so viewers received a marvellous contrast of an elegant woman in a variety of white dresses expressing some pretty brutal levels of then-considered masculine authority. Pearce plays the role brilliantly, and her ongoing presence through the series is one of the reasons it was so popular. She is pretty much the most progressive element in the whole show, and certainly one of the most entertaining.

Stephen Grief plays Travis with a slightly camp edge, but also a very serious and driven demeanour. He's glad head-to-foot in black leather, which does aid in the camp part, but Grief's performance has enough of an edge to pull it off. It's certainly a bit of a stereotype to give Blake an arch-enemy like this, but as is often the case it's a stereotype that works. With the introduction of Travis the series personifies Blake's pursuers, and emphasises that side of the series: Blake might be attacking the Federation, but he's constantly on the run from it as well.

Travis' origins are a bit muddy. His past pre-series encounters with Blake are retold quite cleverly, with Travis beginning the story to Servalan, before we cut to Blake telling the second half to his friends. When this episode was originally scripted as episode 4 ("Seek and Destroy") the role occupied by Travis was going to be occupied by Dev Tarrant (Jeremy Wilkin). This explains the weird duplication of political massacres: we saw one in "The Way Back", and originally this was to be the massacre Tarrant was referring to. With the change to Travis, a second massacre is required, with Blake acknowledging the duplicate events as well as having to explain away how he's remembering events that happened before the Federation imposed a memory block on his mind.

Much of the episode's second half works as an excellent sort of police procedural, with Travis leading an investigation into the communications centre raid and attempting to piece together exactly why Blake was there. It's an unexpected change of style for the series, and works brilliantly to establish Travis as a genuinely clever antagonist. Sadly, as if often the case, later scripts tend to forget that, making Travis one of those characters who gets stupider and more pathetic as his story goes on.

The episode ends with a neat but well foreshadowed twist, before leaving with a redefined and significantly strengthened purpose. This is the best episode of Blake's 7 so far, and really cements all of the elements that made the series so enjoyable. We're six episodes in, and the quality ratio is up to 50 per cent again.
Posted by Grant at 10:36 PM