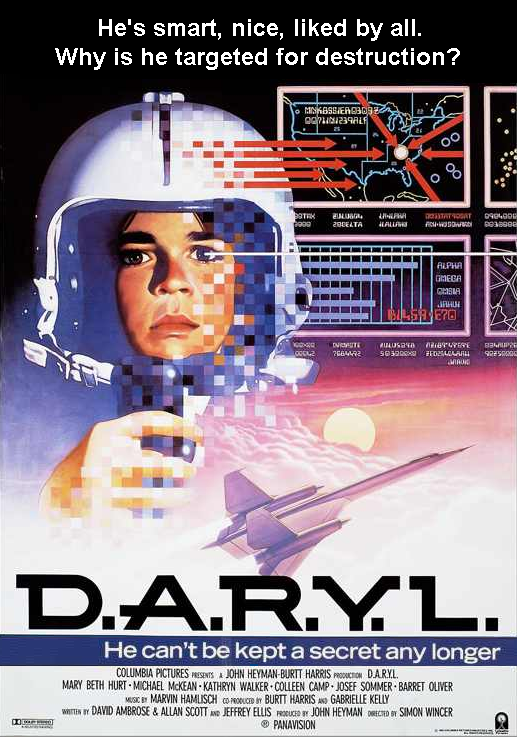 An amnesiac ten year-old boy named Daryl (Barrett Oliver) is found alone in the woods. While the authorities look for his parents, Daryl is housed with a foster family: Joyce (Mary Beth Hurt) and Andy Richardson (Michael McKean). Despite his amnesia Daryl shows unexpected intelligence, physical skill and maturity. It is rapidly revealed that Daryl is not a boy at all, but rather an experiment in artificial intelligence: a data-analysing robot youth lifeform, or D.A.R.Y.L.

D.A.R.Y.L. is not a good film. Its story feels reheated and perfunctory. Its pace is slow and lethargic. Its performances are broadly telegraphed and flat. Visually it is competent but ordinary. I re-watched it as part of an extended 1980s movie kick that has thus far also included The Karate Kid (reviewed here) and WarGames (soon to be featured over on FictionMachine). Nostalgia for the films of my childhood led me back to it. A disappointing viewing experience will now hopefully keep me away.

At the very centre of D.A.R.Y.L. is a genuinely interesting philosophical conundrum: if you create a replica of a human being so accurate that you can no longer tell the difference between the original and the copy, at what point does the copy effectively become human? Sadly it's not a conundrum that's best suited for an all-ages adventure movie, and so to a large extent the issue is under-exploited. Instead we get heart-warming family bonding, a US army general demanding an experiment be terminated, and a precocious ten year-old boy robot driving cars, flying fighter jets and winning games of baseball.

The acting in this film really is quite awful, but it's that special kind of awful that seems due to lacklustre direction and a remarkably poor script. Director Simon Wincer made his Hollywood debut here after establishing himself in Australia. To be honest, and despite the odd hit like Free Willy, he never really convinced audiences or industry of his talents. At best his films are broadly satisfying but unimaginative. At worst they're kind of awful to sit through.

There is the odd clever moment. Early in the film Daryl demonstrates remarkable skill at playing the videogame Pole Position. Later on he's driving a car in a high speed freeway chase, and the camera angles are deliberately aligned to reflect the earlier videogame. It's a moment I appreciated, especially given the lack of similar moments in general.