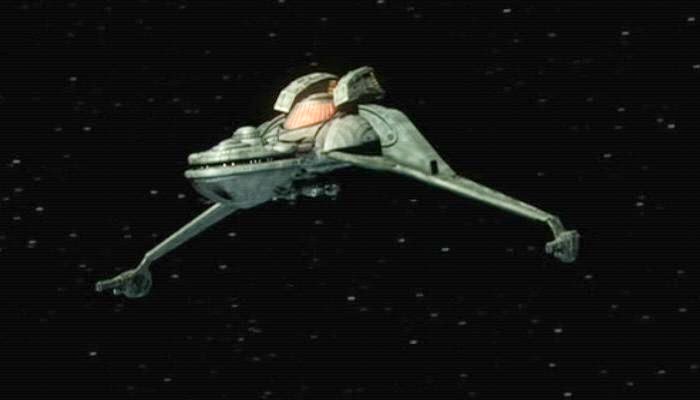 A Klingon bird of prey is ambushed by a group of genetically modified humans known as 'augments'. They kill everyone onboard and steal the ship. With the Klingon Empire moving towards violent conflict with Earth over the incident, Captain Archer (Scott Bakula) is dispatched to bring back the augments at any cost. He is assisted in his search by the convicted criminal Arik Soong (Brent Spiner) - the geneticist who originally brought the augments to life and raised them as his children.

This episode marks the beginning of yet another change to the narrative structure of the series. Seasons 1 and 2 presented broadly self-contained episodes in a similar fashion to Enterprise's immediate predecessor, Star Trek: Voyager. Faced with declining viewing figures, the series was transformed for its third year into a much more serialised affair. There was still a solid smattering of self-contained episodes, but overall the season was shaped by a single year-long narrative about the Enterprise travelling into the Expanse to stop the Xindi.

Season 4 presents a third strategy, which is twofold. Firstly the season is largely broken down into a series of multi-episode narratives. This episode, for example, is the first part of a three-episode story. Secondly the series begins to indulge heavily in what's often referred to as "continuity porn". These new stories are all derived heavily from pre-existing elements of Star Trek lore. In this case, "Borderland" collides three bits of Star Trek history. It introduces a group of genetically modified "super-humans", as originally introduced in Star Trek's "Space Seed" and furthered in Star Trek II: The Wrath of Khan. It brings back the Orions, an occasionally seen race of green-skinned slavers from both the original Star Trek and the animated series. It also introduces Brent Spiner as Arik Soong, an ancestor of Commander Data's creator Noonien Soong from The Next Generation. This is the fifth character in the Soong/Data family that Spiner has played. I don't think anyone in the franchise has come close to playing as many interrelated roles.

Spiner is fantastic as Soong, and his presence is exactly the kind of continuity reference I like to see. He works independently as a typical sort of mad scientist, which is required by the episode's plot, and certainly anyone new to the Star Trek universe will find him an interesting and easily relatable character. For those in the know, he gives the episode a bonus degree of frisson and the pleasure of discovering a previously unseen element of a popular character's history. It's a testament to Spiner's skills as an actor that he behaves and speaks entirely unlike Commander Data, the character he famously played for seven TV seasons and four feature films.

The augments are slightly less successful. They are presented and performed as a generic sort of intergalactic street gang, all dressed in ripped-up clothes for no readily apparent reason. Actually there is one possible reason, which is their clothing and hair makes them resemble the similarly engineered humans from The Wrath of Khan. Those guys had been living in a hostile alien wasteland for almost two decades, however, and the augments here have no similar excuse.

The overall storyline is hijacked fairly early on when T'Pol and eight other crew members are kidnapped by Orion slavers, forcing Archer to abandon the hunt for the augments and rescue them. The slaver's market is drawn in incredibly broad strokes and really doesn't stand up to much scrutiny. It's also slightly distracting to see professional wrestler Big Show, aka Paul Wight, as the lead slaver. This isn't the first time a professional wrestler has appeared in a Star Trek episode, but it's equally distracting every time.

There's something very off about the slavers sequence. I think it boils down to how T'Pol is essentially stripped of her own agency and left to be rescued by Archer. There's something about the way she passively waits in her cage, then passively gets held up for sale (physically - Big Show is 7 feet tall and essentially holds her up like a doll), and ultimately waits until Archer breaks her out. I wanted a more pro-active character escaping captivity herself.

While there are some unsatisfactory elements throughout this episode, it's held together by a very fast pace and a great climax: the augments storm the Enterprise, disable the ship and rescue Soong from captivity. It all feels rather like the first act of a feature film, which - with a total running time of 120 minutes - I suppose this three-parter is. I was happy enough. The season quality ratio jumps up to 75 per cent.
Posted by Grant at 7:09 PM