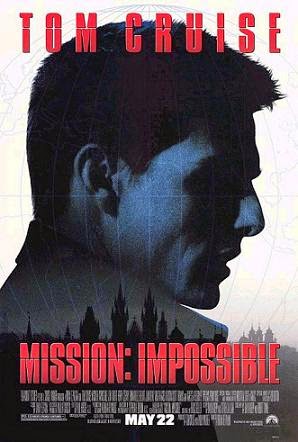 Mission: Impossible strikes me as one of Hollywood's slower movie franchises. I recently rewatched the first film in the series, released in 1996 and directed by Brian De Palma. A fifth film, Mission: Impossible: Rogue Nation is due in cinemas in a few months' time. That's a 19 year gap from first film to fifth, or almost five years between each sequel. James Bond, by comparison, has averaged just over two years between each film. The Fast and the Furious movies average about two years as well.

It all makes Tom Cruise's ongoing performance as super-spy Ethan Hunt rather surprising. If we ignore the nostalgic "many years later" sequels like Never Say Never Again or Indiana Jones and the Crystal Skull, then we can see that Harrison Ford played Indiana Jones for eight years, and Sean Connery played James Bond for nine. Tom Cruise has played Hunt for nineteen years. To start beating that kind of franchise longevity you have to start looking at Japanese franchises like Tora-San (still the world record-holder with 48 films in 26 years, all starring Kiyoshi Atsumi as Torajiro Kuruma), although I note that next year's X-Men: Apocalypse will bring Hugh Jackman into his 16th year as Wolverine. It's actually quite a shock to re-watch Mission: Impossible after a break of some years. Tom Cruise seems so young.

In Mission: Impossible, IMF agent Ethan Hunt goes on the run when an unknown conspirator murders his entire espionage team. To uncover the mole he assembles his own group of disavowed agents to steal a list of secret agent identities from the CIA headquarters in Virginia.

In retrospect this is a slightly odd movie. Not a huge amount happens. There are three set pieces: the initial mission, the infiltration of the CIA's secure data room, and a climax on a high-speed train. There is honestly not a huge amount of plot in between, given the film a slightly sparse, under-populated feel.

The opening mission, and its ensuing massacre, is very cleverly staged. Hunt's team is very quickly set up and established with distinctive and likeable personalities. It's also very cleverly cast: the presence of Kristin Scott Thomas and Emilio Estevez leads one to assume their characters are going to be around for a while, so when they're both abruptly murdered it does come as a big surprise. Tom Cruise does a good job of expressing Hunt's rising panic as one colleague after another dies in front of him, with him incapable of stopping it.

Once Hunt is framed for the betrayal of the team, he goes rogue with fellow survivor Clare (Emmanuelle Beart) in an attempt to flush out the real traitor (code-named "Job", after the Biblical text) and prove his own innocence. Enter Ving Rhames and Jean Reno as two ex-IMF agents who join up with Hunt on the promise of a major payday. From here it's a shop hop-and-jump from midpoint to climax.

This is, of course, an adaptation of a very popular 1960s television series, and when the film came out the series' fans had two major criticisms. The first regarded the identity of the film's villain, which I won't go into here. Suffice to say I don't have a problem with the plot development, but acknowledge those closer to the material would easily feel differently. The second regards the idea that the film has transformed an ensemble team-based franchise into a hero-based single actor franchise. While it's easy to see how some fans reached that conclusion - it's a Tom Cruise film, he's the only one on the poster and the film dedicates the majority of its time to his character - it's also not really accurate. Hunt is a part of one team in the film's first act, and within minutes of losing them he is out assembling another. There may be a shift in narrative focus with the film, but there certainly hasn't been a shift in narrative content.

There are plenty of highlights through the film. Rhames and Reno are both great, although Reno's part is arguably underwritten. Vanessa Redgrave is an absolute stand-out as Max, a pseudonymous trader of information for the world's criminal underground. In many ways it's a shame she was never re-used in the film's sequels. Sadly Emmanuelle Beart doesn't really get a lot to do beyond make sad-eyed faces at Tom Cruise. She's by far the most underutilised member of the film's core cast, which comes as a problem since the rest of the team are all male.

The whole film is shot with a heightened aesthetic and tone, which is pretty much director Brian De Palma's standard approach the filmmaking. Expect a lot of tilted camera angles and aggressive cuts from medium shots to close-ups. On the whole it works rather well, although the film never quite shakes the sense that it's a bit artificial. Several camera angles make use of visual effects and cleverly-built sets to deliver smooth, dynamic tracking shots, but they do call attention to themselves a little too much. Several times I wound up considered how a scene was shot instead of simply enjoying the scene.

The film's soundtrack feels like a major creative step for composer Danny Elfman, who at this stage had primarily offered scores for over-the-top films by Tim Burton and Sam Raimi. This is by far the most mainstream work he'd produced to date, and seamlessly blends his own baroque stylings with the driving Mission: Impossible theme composed for the TV series by Lalo Schifrin. When the title theme bursts into life during the film's climax, Elfman manages to turn a cleverly staged action scene into something genuinely thrilling to watch.

It's a wonderful climax too. It takes a lot for an action sequence to stand out, and even 19 years later Mission: Impossible has one of the best. It starts modestly, hits a point where nine action flicks out of ten would bow out, and then makes that one extra push into the realms of the utterly ridiculous. I can't recall how many times I've seen it, but the climax still entertains me every time.

This is by no means a perfect film, although it contains multiple scenes that suggest a much stronger work than it ultimately is. Certainly it was good enough at the time to seem a brilliant Hollywood action-thriller. Time has diminished it a little, but there are still many worthwhile moments to enjoy. I remember leaving the cinema clamouring to see a sequel; I, and everybody else, had to wait four years.
Posted by Grant at 6:06 PM