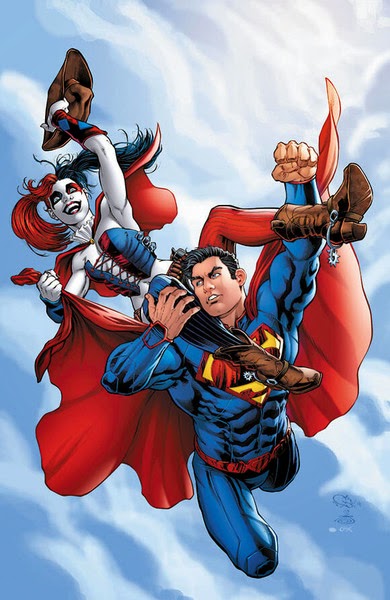 It's a weird time to be analysing DC's superhero titles, since we're only a few weeks away from DC's big move from New York to Los Angeles. To paper over delays in producing new books over that time the company is presenting a massive two-month event called Convergence. In addition to a weekly miniseries there's a raft of two-issue storylines bringing back and mashing together a lot of old characters and concepts from the 1980s through to the 2000s. I have to be honest it's not grabbing my attention and I'm unlikely to pick up many of these temporary books. I am interested to see how well they all sell.

Then in June we're getting a mini-relaunch for the whole line. New directions on many of the old books, new costumes for some key characters - which is what you do when you don't have a new direction, but want to make it look like you do - and 25 new monthly titles and miniseries. DC will also be dropping the "New 52" moniker, which is fair enough - you can't be new forever. I guess that means this is the second-to-last instalment of this particular column. Come June I'll have to call it something else.

Let's move onto the most recent DC titles, to see how they're faring. These are basically any books that have either launched or had a major reshuffle in the past six issues.
Some other general observations:


So all up, which books are in trouble? Books coded 'orange' are selling between 20,000 and 30,000 copies a month, so there's a good chance DC is keeping a very close eye on them. Books coded 'red' are selling less than 20,000 copies and are in immediate risk of cancellation. Books coded 'black' are dead in the water with less than 10,000 copies shipped. Anything already cancelled or about to be relaunched is highlighted in bold text. With the relaunch coming, obviously the decks are kind of getting swept. Come June, however, I'd keep a very close eye on Gotham by Midnight and Lobo, which surely must only have a few issues left in them, and Green Arrow - which is crying out for a high profile relaunch with a popular creative team. If I was DC I would be trying to get Scott Snyder and Greg Capullo to jump from Batman to Green Arrow, and then dangling Batman out for any big league Marvel creator willing to jump ship for a year.