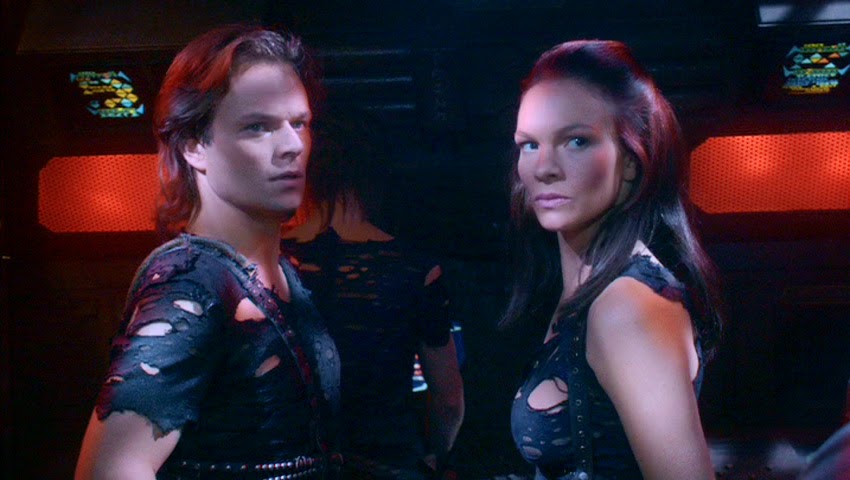 After saving Cold Station 12 from a massive pathogen leak, Captain Archer (Scott Bakula) is back on the trail of the augments and their stolen Bird of Prey. Dr Soong (Brent Spiner) has finally realised how uncontrollable his 'children' are once Malik (Alec Newman) decides to seed the atmosphere of a Klingon colony with stolen pathogens in order to spark a Klingon-Earth war.

This is the episode where the stretched narrative of the first two parts strikes home, since there's precious little here for anybody to do. Sure the Enterprise pursues the Bird of Prey, and there's a bit of a fight, but there's nothing to the episode that couldn't have been compacted into the earlier episodes. This episode is, all things considered, remarkably dull.

There are some highlights. Archer has a wonderfully inventive and dangerous way to escape a service tunnel set to fill up with infectious diseases. There is always a certain level of enjoyment to be had in spaceships shooting at each other. After that I begin to struggle a little.

The episode's biggest problem is that all of its plot developments have been thoroughly sign-posted for two weeks in advance, so as events occur here - like Soong finally realising Malik is a homicidal maniac - there's no sense of surprise or excitement. It feels like an exercise in ticking boxes. Khan Noonien Singh finally gets name-checked in an obvious and unnecessary manner, as does Soong considering getting out of genetics and into artificial intelligence: because that's what scientists do in Enterprise-land, specialise and train for decades before spontaneously deciding in your 50s to completely change your field of study entirely and become an expert in something else.

Alec Newman does his best to present Malik as a serious screen villain, but he looks like a cast-off from an amateur theatre production of Mad Max. He's impossible to take seriously, and isn't very convincing. Brent Spiner continues to be a charismatic and entertaining presence as Arik Soong, but by this point in the story he doesn't have a great deal to do.

Three-part serials like this only work if there's new material to sustain each instalment. Part 1, for better or worse, featured the Orion slavers. Part 2 featured the Cold Station 12 research base as a fresh setting. Part 3 just has the other elements from the first two episodes, and spends 40 minutes wrapping them up. That's simply not enough. That leaves Season 4 with four good episodes out of six, and a quality ratio of 67 per cent.
Posted by Grant at 8:28 PM