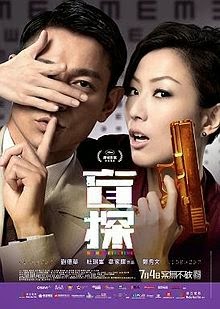 Johnnie To has been pretty much the most talented and effective film director in Hong Kong since the handover. His combination of stylish gangster films and idiosyncratic comedies has made him one of the most interesting directors in the world today. While his fame hasn't really extended far beyond Hong Kong and China he does have a growing number of ardent fans in English speaking markets. I'm certainly one of those.

Blind Detective is one of his most recent films. It is a romantic comedy crossed with a mystery, released in Hong Kong and China in 2013. It re-teams actors Andy Lau and Sammi Cheng, who had previous co-starred in To's 2001 hit Love on a Diet.

Former Hong Kong police detective Johnston (Lau), rendered blind during his final assignment, now works as a private detective. When he encounters female police officer Ho (Cheng), she recognises his talents immediately and forces him to help her solve a decades-old mystery over a missing girl.

The film's title is a clear reference to To's earlier film Mad Detective, which starring Lau Ching Wan as Bun, another retired police detective with idiosyncratic methods of solving crimes. While that film was a thoughtful, unsettling sort of drama/thriller, Blind Detective is mostly played as a broad comedy. Slapstick is in plentiful supply, as is a gregarious amount of playful over-acting. Both Lau and Cheng do a great job with this: they're both immensely appealing performers and clearly share a lot of on-screen chemistry together.

Sadly the film they're performing in is nowhere near as consistent. Blind Detective is a schizophrenic mess. One minute it's presenting silly character comedy and the next its leads are uncovering the corpses of a dozen murdered women. While it is possible for a film to jump from comedy to drama, or even comedy to horror, Blind Detective fails to make the leap. Each half of the film interferes with the other, and as a result hardly any of it works.

There are flashes of brilliance: To does a great job visually representing Johnston's inner thoughts, as he imagines conversations with murder victims and suspects alike. There's also a fantastic early sequence where Johnston and Ho act out a suspected double homicide, including taking turns between putting on a crash helmet and then smacking the other senseless with a hammer. Many individual elements showcase Johnnie To's remarkable visual eye and unpredictable narrative technique (he regularly makes up the script for his films as he shoots them). In this particular case, however, it adds up to something rather jarring and annoying to sit through.

You can't win them all. Pre-existing fans of To's work will likely enjoy many individual parts of Blind Detective, but if you're looking to try out his films I'd start with something else. Exiled, perhaps. Or Drug War. Or even Mad Detective.
Posted by Grant at 9:26 AM