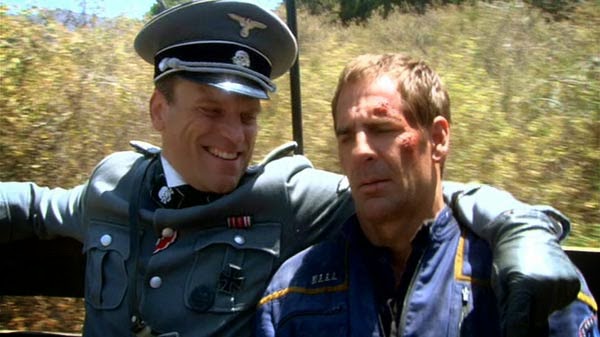 It's 8 October 2004, and time for the fourth season premiere of Star Trek: Enterprise.

While Captain Archer and his crew have successfully defeated the Xindi attack on the Earth, they are not yet out of the woods: the Enterprise has been thrown back in time to 1942, where alien-assisted Nazis have invaded the USA. With Archer on the surface and presumed dead, T'Pol has her hands full when the Suliban agent Silik is revealed to have hitched a ride back with them.

When Enterprise's viewing figures plummeted during its second season, the production team looked for a strategy to claw viewers back during its third. One of their solutions was to undertake a season-long story arc, in which the Enterprise would head into an uncharted and dangerous part of the galaxy to avert the Earth's planned destruction. That arc ended with a rousing season finale, but rather than give the viewers the satisfaction of a triumphant return home to 22nd century San Francisco they instead threw in this curve ball of a season cliffhanger: Archer the prisoner of alien Nazis and the Enterprise trapped in a parallel history.

It's enormously frustrating, not to mention confusing. Enterprise kicked off with a sporadic storyline about a 'temporal cold war', with rival 29th century super-powers sending operatives back through history to change the timelines and gain advantage. It was the worst kind of story arc - regular enough to keep cropping up but occasional enough to never really get a sense of proper momentum or focus. What's worse, the Xindi arc featured manipulation from the far future as well, only it was a different kind of future manipulation that was connected to but not the centre of the time war featured in years one and two. Now that the Xindi time-travelling arc is complete, the series has immediately jumped back to the original non-Xindi time-travelling arc, and I'm confused, irritated and - to be honest - rather bored.

There's also the problem of the setting: 'what if the Nazis won World War II' is about the hoariest cliche in the entire sub-genre of alternative history science fiction. When it crops up here it's worthy of eye-rolling contempt.

If all of that wasn't bad enough, there's also the problem that remarkably little happens in this episode. All up it moves people around the board a little, reveals plot information the audience had kind of guessing anyway, and that's honestly about it.

With the fourth season Enterprise shifted from shooting on film to shooting on digital video. At the same time Paramount cut the series' budget - it was one of the conditions of them getting a fourth season at all. The difference is sadly visible: this is the cheapest Star Trek had looked in many years, and can't have helped the show's chances at a fifth year.
Posted by Grant at 8:53 AM