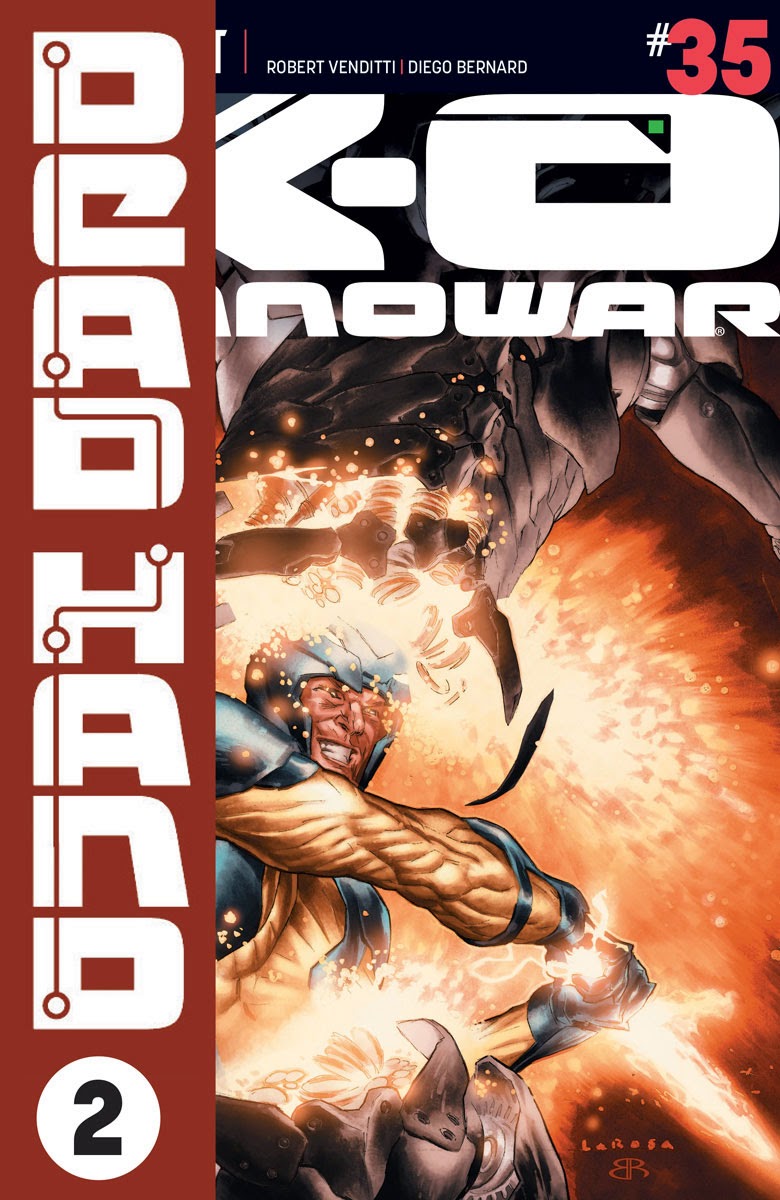 Since 2012 Valiant Entertainment has been doing a stand-up job of publishing a tight, well-curated line of superhero comics, pretty much entirely derived from their earlier 1990s series. Archer & Armstrong, Quantum & Woody, Ninjak and a bunch of other titles have all presented solid, entertaining storylines with strong artwork and some really nice production values.

Of course producing your own superhero universe is a bit of an uphill battle, since so much of that market is dominated by DC and Marvel; if a reader is looking for something beyond those publishers, they're likely to look for something different to superheroes - no matter how good those superhero comics might be. As a result I think Valiant has travelled under the radar somewhat - praised by people who do read their books, but the problem is that not enough people read them. Let's try to correct that with a look at this week's Valiant release, X-O Manowar #35.

Full points to Valiant for including a fantastically succinct story summary on the first page of this issue. For even a completely ignorant reader who has never read an issue of X-O it makes the succeeding 20 pages clear and easy to follow. What we do have is a massive artificial intelligence moving across the galaxy sterilising entire systems at a time, and one warrior from ancient Rome in a high-powered robot suit standing in their way.

This is well-plotted and immensely entertaining stuff, enhanced with some great old-school artwork - I loved the two-page spread in particular. It's imaginative, iconic, and boldly drawn and presented. This is what superhero comics should always be like: easy to pick up, entertaining to read, and addictive enough to get people coming back to see what happens next. (4/5)

Under the cut: reviews of some of this week's new comics: Citizen of the Galaxy, Rick & Morty and The X Files. As I'm travelling for the next two weeks, I won't be reviewing any of my standard purchased comics while I'm away. I promise to get back to them on my return. 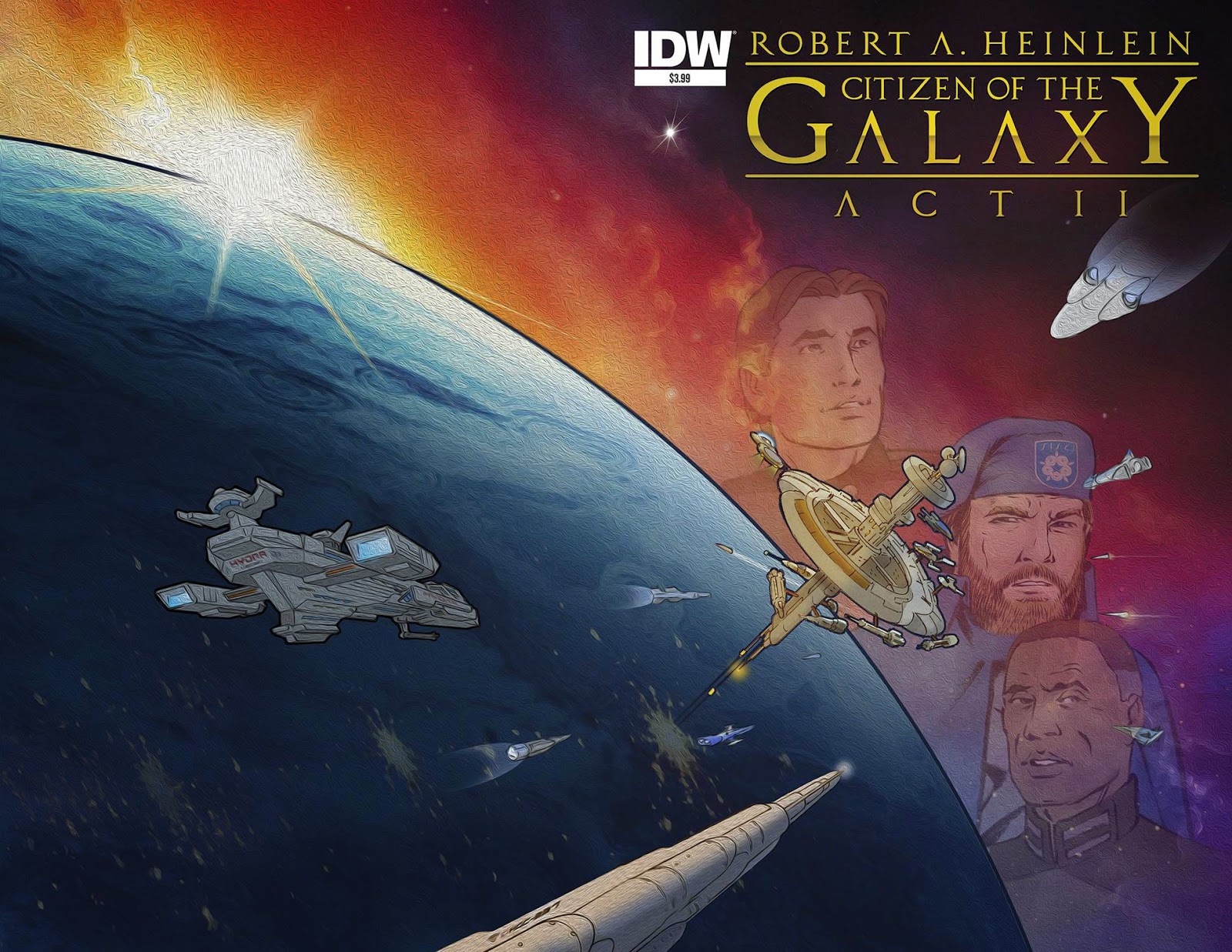 Citizen of the Galaxy #2

This is the second part of a three-issue adaptation of Robert A. Heinlein's novel of the same name. I've never quite seen the appeal of these sorts of direct adaptations. They're essentially telling the exact same story, often with snippets of the original book as narration. This issue hasn't really done a lot to change my opinion. It all feels rather sedate, with the narration putting a pretty firm distance between the reader and the characters. To be a honest it feels less like reading an engaging comic book and more like skimming an illustrated synopsis of Heinlein's novel. I wasn't particularly enthused; obviously if you're a fan of Heinlein's work you may find a different experience. (2/5)

The Adult Swim animated series now gets its own monthly comic book, thanks to writer Zac Gorman and artist C.J. Cannon. I'm going to admit from the outset that while I was aware of the existence of Rick & Morty, I have not seen one second of the show itself. As a result this tie-in comic was my first experience of the characters. It's unusual, and rather scrappy in a visual sense, but it's a reasonably funny story of time travel and stock market tampering and will certainly have its fans. Certainly there's quite a lot of funny dialogue involved. I'm kind of on the fence with this one: I think I'd like to track down the show, watch a few episodes and then revisit this comic to see what I think. (3/5)

I'm not sure what the status of this X Files comic is now that the Fox Network is bringing the series back for an actual tenth season. It was originally launched based on the idea that this was a proper authorised continuation; now it likely joins all other licensed fiction on the fringes of series canon. I actually tried this series out back when it started, but quickly gave up when it became a pretty tacky series of returning and resurrected characters. Jumping back in two years later and I find an issue with Mulder kidnapped and confronted by a series of clones of half the supporting cast of the series - it looks like not much has changed in the last 20-odd issues. These sorts of stories are best left to fan fiction. The art is solid, the dialogue all rings true to the source, but the plot just reeks of poorly thought-out continuity porn. (2/5)
Posted by Grant at 8:30 AM