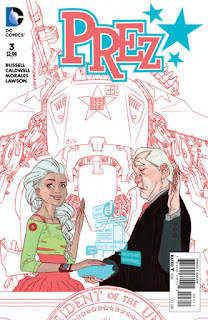 After a pretty horrifying month in July, DC Comics managed to bounce back a little in August - mainly due, I suspect, to their very popular "Bombshells" line of alternative covers. Most of the longer-running titles managed to make a fairly strong bounce back - it just remains to be seen if they drop back down in September when the Bombshells covers aren't a factor.

So much for the older titles, but what about the new? We're just four months into DC Comics' latest relaunch, when 21 separate titles were tossed into the marketplace. The other week DC confirmed the cancellation of seven of them. Add in the miniseries that were ending anyway, and that's almost half of them that are already on the way out. Some of the cancellations are rather sad. The Omega Men and Prez, for example, are two books that have actually provided something fresh and different to DC's lineup, but had their marketing either mismanaged or under-funded and never got the opportunity to present themselves well to the market. Other cancellations are simply to be expected: Scott Lobdell's Doomed was never going to find a large audience no matter how hard DC may or may not have pushed it.

It's still fairly clear to me that something needs to be done to the DC Universe to re-invigorate its sales and profile. To be honest it may be as simple as returning all of the core superhero titles to their traditional status quos and hiring in some genuinely strong talent to write and illustrate them. At the moment Superman's running around in jeans with limited powers, Jim Gordon is a robot Batman, and the Green Lantern Corps has been decimated. There's a good argument to be made for DC to focus on its core properties and just tell good stories with them. I think the market is tiring of stunts and giving diminishing attention to relaunches and re-numberings.

That's not to say there isn't a place for fresh interpretations anywhere in the DCU. For the past nine months or so Genevieve Valentine has been doing an outstanding job re-purposing Catwoman as an intelligent crime drama, and she's been rewarded with the most stable sales of the entire publishing line: it might only be around the 26,000 copies mark, but it seems to be selling them damn-near every month. Unfortunately DC is moving on with a fresh creative team and a return to over-sexed cat burglary for the immediate future. It's a shame: these secondary titles are where there's the greatest opportunity to try new things.

So which books remain in danger? Books coded 'orange' are selling between 20,000 and 30,000 copies a month, so there's a good chance DC is keeping a very close eye on them. Books coded 'red' are selling less than 20,000 copies and are in immediate risk of cancellation. Books coded 'black' are dead in the water with less than 10,000 copies shipped - this month there aren't any. Cancelled titles and miniseries are highlighted in bold: most of these books only have another three issues to go.