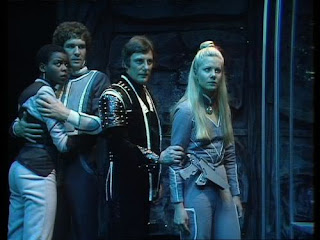 The survivors of the Liberator appear to be trapped on Terminal forever, until they are unexpectedly rescued by the mysterious Dorian (Geoffrey Burridge) and his space freighter Scorpio. He takes Avon (Paul Darrow) and the others back to his base on the planet Xenon - but does he have an ulterior motive?

With the spontaneous re-commissioning of Blake's 7 on the night of the series finale's broadcast, production of a fourth season was understandably delayed. Producer David Maloney was already hard at work on both When the Boat Comes In and The Day of the Triffids for the BBC, and entirely unavailable. While script editor Chris Boucher was available, no scripts had been developed and no writers hired. Contracts needed to be negotiated with the regular cast: Paul Darrow, Michael Keating, Josette Simon and Steven Pacey all agreed to return. Jan Chappel chose to bow out. As a result of multiple challenges in bringing the series back, Season 4 did not premiere in January 1981 but rather in September.

New producer Vere Lorrimer, who had directed almost a full third of Blake's 7's episodes to date, was keen to re-invigorate the series. He ordered a new title sequence, a new arrangement of closing theme music, new props and costumes, better visual effects, and of course Scorpio: a Millennium Falcon-esque replacement for the Liberator. To replace Cally, Glynis Barber was cast as the enigmatic gunslinger Soolin. On a purely aesthetic level, Lorrimer's changes do have an effect: ever since childhood Season 4 has always felt like a shift from the preceding three years. It's a little grittier, a little more terse, and certainly a world away from the more adventurous space fantasy of Season 3. As for "Rescue" itself, well...

The episode is effectively an adaptation of Oscar Wilde's The Picture of Dorian Gray, to the extent that it even features an analogue for Gray actually named Dorian. He and his partner arrived on Xenon some centuries ago, and found a cave whose unexplained energies transferred the age and disease of one man into the body of the other. For centuries Dorian has continued to live like this, trapping people in the cave and allowing them to develop grotesque deformities and die while he remains young and healthy. He has now travelled to Terminal to rescue Avon and the others specifically with the plan of trapping them all in the cave and using them to sustain his life for a few more years.

It's a neat enough conceit, and I'd forgive the hand-waving of exactly how the cave works, except in pretty much every other respect the story fails to make sense. Why was Dorian specifically tracking the Liberator and its crew? How did he know to look for them on Terminal? Why is it so important for him to have five victims? What precisely has he been doing for the past 200 years? He lives on a hidden base on some desolate backwater planet, with only Soolin for company - and quite how she came to being his girlfriend is never explained.

The performances of the regular cast help to lift the episode considerably. Paul Darrow is particularly laconic this time around, lightly mocking Dorian ever while the latter is explaining his plans to kill him. Vila (Michael Keating) has pretty much completed his transition to full-blown alcoholic thanks to his experiences over the course of the series. Tarrant (Steven Pacey) has settled down at last, and has become a much more likeable character than his flip-flopping personality in Season 3. Dayna (Josette Simon) suffers a little: she was created as a skilled fighter and weapons designer, yet in this episode she's shoe-horned into the maiden-in-distress role not one but three times.

This episode introduces Soolin (Glynis Barber), who pretty much doesn't get any back story to speak of until the series finale. She's mature, relaxed, maybe a little cynical. There's honestly so little on paper but Barber does an outstanding job of giving her a personality anyway. Cally (Jan Chappel) departs with two words in voiceover, as she is killed in the destruction of Terminal's underground base. It's a shame that such a good character and actor was written out in such an abrupt fashion - to be honest the cast barely get the chance to mourn her. It feels like a missed opportunity.

Some proper time and money seems to have been spent on the episode's visual effects. Scorpio is an excellently realised model, and generally well shot. The sequence of its landing in Xenon Base is very well done, which is something I'm grateful for: I'm pretty sure they re-use the footage in at least half the episodes this season. Less successful is the mutated creature that lives in Dorian's magical cave, mainly because it's patently obvious the production team have slapped the head of a Sea Devil from Doctor Who onto a rubbery green suit.

Geoffrey Burridge's performance is a fascinating one. When Avon asks him who his original victim was he awkwardly answers with 'my partner', in a fashion that suggests his partner was of the romantic rather than business variety. When his last victim is killed during the climax, and reverts in death to their pre-mutated form, they are revealed as a slim, young man in an open shirt. It was only when looking up Burridge's name when writing this review that I found out the actor himself was gay: If it wasn't for the episode presenting Soolin as his girlfriend, I'd honestly think he played Dorian as gay too. Certainly such a reading casts his flirtatious scenes opposite Avon in an entirely new - and to be honest rather refreshing - light.

"Rescue" does succeed in the sense that it gets the cast off Terminal, and within reach of securing not only a permanent base but also a new ship - albeit one stuck behind a locked door. Where it fails is in presenting a story that fully entertains and properly makes sense. Once you think it through, not a lot actually happens in this episode, and what does happen doesn't make too much sense. The series has successfully re-invented itself, and I like the production values, Soolin, Scorpio, and even the new opening credits (although the closing music is pretty dire). This episode itself, however? Not so good.
Posted by Grant at 7:25 AM