Doctor Who: "The Magician's Apprentice" 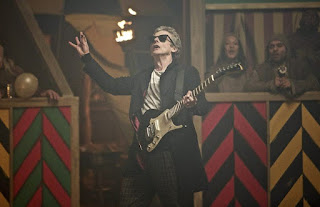 Doctor Who has returned once again for a ninth new season - or a thirty-fifth if you want to be one of those weird pedants who considers the two separate Doctor Who productions one big long five-decade enterprise. Also returning is Peter Capaldi for a second season as the titular Time Lord, Jenna Coleman for a third season as companion Clara Oswald, and Michelle Gomez as the villainous Missy.

This is a big season opener: it's large in scale, particularly in its first half, and the story it tells feels both momentous and historic. It is an episode steeped in Doctor Who history - so much so that it's not really possible to discuss the story without giving a little spoiler room first. Suffice to say it begins with a young boy in a minefield and it ends with the Doctor attempting the unimaginable. It's also the first part of a two-part story, so just how well the story will ultimately be is a question that cannot be answered for another seven days. If you're already a regular watcher of Doctor Who, then Season 6's "The Impossible Astronaut" seems the closest comparison in terms of tone, quality and potential.

Doctor Who is a series seemingly obsessed with its own anniversaries. It doesn't seem that long since the series was celebrating its 50th anniversary, and so I cannot help but wonder if writer/producer Steven Moffat noticed that 2015 was the 40th anniversary of the Tom Baker serial "Genesis of the Daleks". It has been just over 40 years since the Doctor was given the opportunity to destroy the Daleks at the moment of their creation, and ultimately chose to let them survive. 'Listen,' the Doctor asked Sarah Jane Smith, 'if someone who knew the future pointed out a child to you and told you that that child would grow up totally evil, to be a ruthless dictator who would destroy millions of lives, could you then kill that child?' Now Steven Moffat, who has always been a remarkably bold writer of the series, seeks to literally answer that question. The Doctor arrives on a battlefield, starts to rescue a young boy from death, and discovers that the battlefield is on Skaro and the boy is the young Davros. What will the Doctor do? What would you do?

From there the episode runs a frantic chase through a variety of past locations with multiple cameos from former monsters and characters, until Clara and Missy team up in order to find the Doctor and stop him from making a terrible mistake. This is why "The Magician's Apprentice" is such a difficult episode to properly judge. It's very effective at what it's doing, but all that it ultimately does is set up the situation. How the characters survive, escape and resolve the Doctor's dilemma is entirely up to "The Witch's Familiar" next Saturday.

Peter Capaldi is a stunning Doctor, which isn't a surprise given he's one of the United Kingdom's best actors. You actually get all kinds of Doctors in this episode. Those who like their Doctors to-the-point and 20th century will get a real thrill out of him in the opening scene. Those who like the ridiculous, over-the-top antics of the 21st century Who will probably adore his entrance later in the episode. For me it was a little too ridiculous and silly to completely enjoy, but not so much that it ruined the whole episode.

It's great to have Michelle Gomez back as Missy. This episode does pretty much everything right in terms of her character. Her miraculous survival after apparently dying in Season 8 is delightfully hand-waved away, and her relationship with the Doctor is finally spelled out in a fashion that always seemed obvious but had often been forgotten or neglected. She is the Doctor's best friend, and always has been. There's a closeness between the two characters that has been missing for a while - arguably since Roger Delgado's tenure as the original Master - and it's wonderful to have it back.

Given the large number of scenes and locations, it's Jenna Coleman who seems partially sidelined as Clara. The character returns pretty much unchanged from the last time we saw her, so fans who like the character and those who don't are unlikely to change their minds based on her appearance here.

Julian Bleach returns for the second time as Davros. He does a very strong version of the character that owes a great deal to Michael Wisher's original - and best - performance. It's also great to see the Daleks back, and once again using multiple generations of Dalek in the one story. I really like that approach. It makes sense that older models would survive and work for and with more recently updated versions. I think the only versions that don't get actively foregrounded are the fat bumper-car versions introduced back in "Victory of the Daleks", which isn't too bad a thing given how unpopular they were.

Colony Sarff is a new creation, and I suspect he will be a very popular one. The whole idea of a heaving mass of snakes disguising itself as a humanoid individual is a great one, and the reveal of his true nature is well-timed and very effective. I really hope Sarff survives next week's episode to plague the Doctor another day.

A season opener is all about grabbing an audience's attention and ensuring they tune in or download each episode for the rest of the run. In that regard "The Magician's Apprentice" is an enormous success. Now it's up to the follow-up to actually turn this stunning presence into a satisfying and dramatic story.
Posted by Grant at 7:02 PM