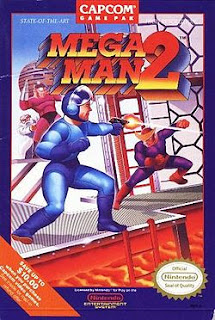 Rockman was a platform videogame released by Capcom in 1987 for the Nintendo Famicom. It was Capcom's first console-only title, having spent previous years working primarily on arcade games. It was also a bit of a flop, selling well below expectations and not really making any great impact on the market. It was released in the USA under the name Mega Man, but didn't sell much better.

That really should have been the end of it, except producer Keiji Inafune and his development team really believed in the quality of their game. They wanted to make a sequel and give it another chance, and so slowly developed one while simultaneously working on higher profile and more successful games for Capcom. By the end of 1988 they had completed their sequel: Rockman 2: The Mystery of Dr Wily, aka Mega Man 2. It wound up selling more than 1.5 million copies.

Mega Man has gone on to have numerous sequels, remakes, and spin-offs. It's been adapted to animation, launched in various merchandise forms, and generally become one of the more iconic figures in Japanese videogames. The character is even available as one of Nintendo's popular Amiibo figurines. All of that long-term popularity - not to mention a sizeable cult audience - is thanks to Mega Man 2.

It's a platform game, and a fiendishly difficult one at that. That said, it's still easier than the original Mega Man. The player controls the titular Mega Man as he fights his way through several levels, each of which concludes with a challenging boss fight. The player is free to choose the first eight levels in whatever order he or she chooses. That helps alleviate the difficulty problems considerably: finding one level too hard? Just switch to another one for a while. The game also employed Nintendo's password system. Defeat a boss, and a password appears on screen. Write it down, and re-enter it the next time you start the game, and you can skip the boss altogether and keep going where you left off. It's a primitive method of 'saving' a game, but at the time it seemed like a godsend.

In total there were six Mega Man games released for the NES, although Capcom chose not to release the sixth themselves due to a declining market for NES titles; it was ultimately licensed and released by Nintendo of America. I think Mega Man 2 is still the best game in the franchise: ridiculously challenging, but in that way that fools you into thinking that you'll beat the level if you only have one more go.

I never have beaten the game myself, but I'm sure I will. Just one more go.
Posted by Grant at 7:58 AM