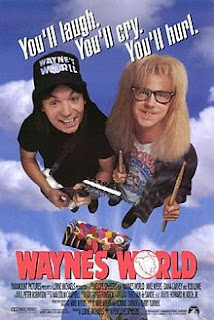 It's remarkable to look back at Wayne's World these days. The film is 23 years old. In many respects its cultural footprint feels overshadowed by Mike Myers' later comedy franchise Austin Powers, however I think this might be the stronger film.

Certainly at the time it seemed very influential, introducing English-speaking audiences to a raft of catch phrases and pop culture artefacts and becoming the 10th highest-grossing film of its year. These days it almost feels quaint.

The film is derived from a long-running series of Saturday Night Live sketches. Wayne Campbell (Mike Myers) and Garth Algar (Dana Carvey) present a no-budget cable access series from the basement of Wayne's parents' house. When a slick executive (Rob Lowe) offers them the television deal of their dreams, and Wayne begins dating an attractive rock singer (Tia Carrere), it seems like all of his dreams have come true - except the executive is up to no good, and soon starts competing for his girlfriend's affections.

To be honest the storyline is secondary to the jokes, which come pretty thick and fast. It's clear that Mike Myers' background was in sketch comedy - his screenplay, written with Bonnie and Terry Turner, is packed with humour in a scatter-shot fashion. It doesn't matter than some of the jokes fail to deliver, or seem a bit lame, because within seconds there's another one to replace it. The sheer quantity of gags pretty much ensures most viewers are going to laugh at something. It's all very well directed by Penelope Spheeris, who sadly never made a better narrative feature after this.

Mike Myers is appealing as Wayne, although to be honest it's a thinly-drawn part. Much more entertaining to me is Dana Carvey's hilariously awkward performance as Garth, who gets many of the film's funniest moments and runs with every single one of them. I've always appreciated Carvey as a comic performer, and it's a shame that his career post-Wayne's World stumbled so badly. These days he seems almost as good as retired.

Tia Carrere brings a lot of presence to her role as rock singer Cassandra Wong, however it's hard to notice that the visible Hawaiian Carrere is playing an ethnically Chinese character from Hong Kong. I don't think this was particularly acceptable back in 1992, and it's even less acceptable watching the film now. I like Carrere a lot in this film, but I can't help but wonder why her character couldn't have been made Hawaiian instead - there's nothing to the character that requires her to be Chinese.

One of the film's strengths is its use of direct address: Wayne regularly talks to camera, as does Garth (hilariously beckoning the camera operator around corners and under tables to quietly confide his concerns). In a brilliant cameo even Ed O'Neill has a go. This self-awareness extends to the film's climax - often the trickiest part of a comedy feature - where a traditional resolution is abandoned in favour of yet more jokes (one of which gets set up within the film's opening minutes before lying in wait for almost 90 minutes).

Like a lot of sketch-based comedy, there are a lot of pop culture gags, but thankfully the production team managed to pick some pretty timeless targets - "Stairway to Heaven", "Bohemian Rhapsody", Terminator 2 and Alice Cooper, for example - that allow them to pretty much work just as effectively today.

These days there are constant rumours of Mike Myers pulling out a fourth Austin Powers movie. I'd much rather revisit Wayne and Garth one more time. While the 1993 sequel was nowhere near as accomplished (Myers forced Spheeris out of the frame, her replacement Stephen Surjik didn't seem to generate as much energy, the film lost money and killed the franchise stone dead), they still feel like they could generate plenty more comedy - as well as give audiences a chance to see what happens to them in middle age.
Posted by Grant at 7:32 AM