Doctor Who: "The Witch's Familiar" 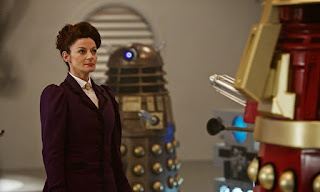 With Clara and Missy dead, the Doctor is trapped with Davros in the centre of the Dalek city on Skaro.

Okay so that first part is clearly untrue: while the cliffhanger ending of "The Magician's Apprentice" clearly showed both characters getting disintegrated by Daleks, I don't think there was a viewer in existence who actually believed for a moment that it was true. So while we do still have the Doctor trapped in a room with Davros, creator of the Daleks, we also have Clara and Missy teaming up to rescue him.

"The Witch's Familiar" is an unexpected second part to the story. The first part had been entirely about set-up - getting the Doctor into a room with one of his longest-running enemies - and I had expected the second to be some typically Moffat-esque extravaganza of time travel and complex paradoxes. Instead for the most part it is actually the opposite: no over-the-top action and madcap shenanigans, just a conversation in a room between old men. What a conversation though. Between the Doctor and Davros reaching an unexpected new connection in their relationship, and Clara's immensely hazardous experience as sidekick to a homicidal maniac, "The Witch's Familiar" is a wonderfully entertaining episode. With this two-parter I think the Capaldi era just found its first bona-fide classic.

In many respects this is an episode about subtle re-definitions. It manages to soften Capaldi's Doctor considerably, and link him much more closely to the Doctor of previous incarnations. It re-connects him with proper compassion again, and while the delightful spikiness of Capaldi's performance remains he does feel a lot more like the Doctor of earlier decades than he did last year. He emerges as a stronger, more entertaining character - and given I already adored his portrayal, that makes him pretty entertaining indeed.

Davros (Julian Bleach) gets additional depth and nuance. For a large part of the episode Steven Moffat's script leads you towards thinking the character is having some kind of last-minute change of heart, but the beauty of the writing is that even when the climax confirms his diabolical nature he remains fleshed out and more fascinating than ever before. The dialogue crackles, and Bleach gives a masterful performance. He's the equal to Michael Wisher, who played the original Davros all the way back in "Genesis of the Daleks", and that's no small compliment.

Michelle Gomez gets a much prolonged run here as Missy, and that's enormously to the character's benefit. When she debuted last year she was silly and amusing, and certainly worked as a follow-up to John Simm's similarly manic Master from David Tennant's time. This story has managed to keep that sort of funny, murderous charm, but also tied her back to Roger Delgado's original Master. The friendship between the Doctor and the Master has been reconfirmed, and they now feel as close as Pertwee and Delgado did back in the 1970s. In fact, Gomez is so strong in these moments that I hope future episodes to feature her character tone the comedic moments down. I really want to see more of a connection between her and the Doctor again.

To an extent Clara (Jenna Coleman) gets sidelined this week - or at least heavily overshadowed by the other three characters. That's not actually a bad thing. There have been plenty of episodes to focus on Clara, and to be honest both Missy and Davros are much more interesting characters. Clara's experience inside a Dalek casing is brilliant, though: not only does it echo her original appearance in "Asylum of the Daleks" (as Clara fragment Oswin Oswald) it provides a fresh perspective on the Daleks as well. Missy's explanations of how Daleks work, and the psychology of their species, are outstanding new developments to a 50 year-old creation. The Daleks haven't been given this much depth since Ben Aaronovitch novelised "Remembrance of the Daleks" back in 1990.

I've noticed I've been feeling a lot of similar things about different aspects of this episode: best Master since 1973, best Davros since 1975, best Daleks since 1990. This is a story heavily steeped in the series' own back story and mythology, and it does a remarkable job with every element. It feels almost pitch-perfect: the dialogue is rich and clever, the humour is well-placed and funny, and the plot developments logical yet nicely unexpected. The final scene is absolutely beautiful.

It is helped so much by the extra time afforded by being a two-parter. If I had one chief criticism of Doctor Who post-2005 it's that it has never seemed to have enough time. That's pretty ironic for a show about a Time Lord. In 45 minutes there is time to set up a new location and a series of guest character, and then there seems to be time for a story or time for character relationships but never time for both. By extending the story over 90 minutes, and keeping the storyline relatively contained and simple, Steven Moffat has managed to include both plot and character, and the episode is all the richer as a result. Apparently Season 9 will feature several two-part stories, and I think that's a wonderful thing.

Sure the episode's not faultless, but take away the silly "sonic sunglasses" and it damn well comes close. Season 9 seems off to a very good start.
Posted by Grant at 10:44 PM