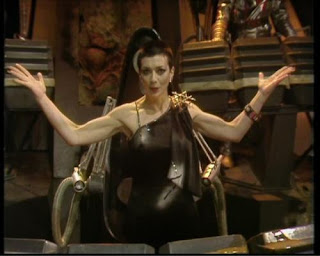 Avon (Paul Darrow) has commandeered the Liberator on a private mission. He won't tell his crew where the ship is going, he refuses to navigate around a mysterious cloud of fluid in the ship's way, and when Tarrant (Steven Pacey) tries to intervene Avon almost shoots him. When the Liberator finally arrives at its destination - the artificially constructed planet Terminal - Tarrant and Cally (Jan Chappel) follow Avon down while Vila (Michael Keating) and Dayna (Josette Simon) discover the untoward effects the cloud of fluid has had on the ship.

"Terminal" marks Terry Nation's final script for Blake's 7. At the time of its production it was intended not simply as the season finale but the series finale. At the conclusion of shooting the actors were released from their contracts and the production team subsequently moved on to other projects. It sounds like the worst kind of urban myth, but BBC1 controller Bill Cotton genuinely did watch "Terminal" go to air in his home with his family, telephone the BBC switchboard to find out when a fourth season would debut, and - on learning the drama department had axed the series - order an announcement be made over the closing titles that the series would return in 1981.

As a finale, "Terminal" is in most respects an archetypal episode of Blake's 7. There is some good dialogue, some neat science fiction ideas around the edges, and more than a few silly costumes and unconvincing visual effects. Most typical of all is its downbeat ending: this was never a series where the heroes triumphed, and while "Terminal" ends with the apparent death of Servalan it also comes with a cost: Blake is apparently long-dead and cremated, and the Liberator gets destroyed. Possibly the most typically Blake's 7 moment is the final shot of Avon. He's been defeated, fooled and manipulated. He's lost Blake, seemingly for good. The Liberator has been destroyed, and he's trapped with his crew on a desolate planet overrun with savage, bloodthirsty monsters - and he smiles. It's a typically ironic Avon sort of smile, but it captures the attitude of the series perfectly.

The slow degradation of the Liberator, and the breakdown of the ship's computer Zen (Peter Tuddenham) is slightly heartbreaking to watch. The moment when Zen breaks into the first person for the first time to say 'I have failed you' is remarkably effective, not in the least due to Michael Keating and Josette Simon's reactions. The rising panic that they give to Vila and Dayna pretty much sells this entire section of the episode. The Liberator is one of my all-time favourite spaceships in science fiction, and it's very sad to see it go. It's doubly sad really, since in the end the ship isn't destroyed by a Federation attack or some alien enemy, but by a stupid moment of stubbornness and an unexplained natural phenomenon.

Terminal itself is very well realised. The surface is cold and bleak, and in the underground base a creepy heartbeat sounds out throughout the episode. Together they make it a remarkably unsettling place to visit, which is well in keeping for a 400 year-old science experiment run awry. The idea that the ape-like Links are super-evolved humans is a great one, and it's a shame that the concept is thrown away, and that the Links themselves look so cheap and unconvincing.

Servalan is, of course, running yet another scheme to capture the Liberator, however at least this time around the scheme is an inventive one: fooling Avon into thinking Blake is alive, and then trading him for the Liberator. Gareth Thomas has a brief cameo here as Blake, which feels slightly unsatisfying - but then since he's an illusion implanted into Avon's mind, a proper reunion would have been impossible.

On an unrelated note, Jacqueline Pearce's "Vogue"-like delivery of the line "Maximum power" (pictured above) is quite possibly the campest moment in the entire history of the series - which takes some doing.

The script's portrayal of Avon is where the episode hits some real problems. He is tempted to meet Blake because the latter (actually Servalan) claims he has uncovered a secret treasure. This doesn't seem convincing as a lure: for one thing Blake was never interested in wealth, and for another the Liberator already has a massive treasure room of gemstones and rare metals already. In the episode's opening scenes Avon is actively murderous - he nearly shoots Tarrant - but there's no real reason for him to act so coldly. It works in terms of building mystery and suspense, but once his purpose is revealed it all falls apart. Paul Darrow does a decent job of papering over the inconsistencies, since he's particularly strong this episode, but he's fighting a losing battle.

One odd piece of plotting in particular sticks out: the Liberator is being eaten away by mysterious space fluid, but Vila and Dayna can't ask Orac for help because Avon took the activation key down with him. There's no precedent for him doing something like that, and no logical explanation for it either. The only purpose is to ensure Orac can't be used to stop the Liberator's destruction. It's sloppy writing.

In the end "Terminal" is a victory in terms of tone and atmosphere and a failure in terms of plotting and character. It does leave the Liberator crew in an interesting position: trapped on a hostile planet, their ship destroyed, and the Federation's President dead. Overall the episode is a satisfying one, despite its faults. After 13 episodes, Season 3 has included eight that I would consider to be good. That leaves the season with a quality ratio of 62 per cent; coincidentally the exact same score as the previous two seasons. Blake's 7 is nothing if not consistent in its inconsistency.
Posted by Grant at 7:32 AM