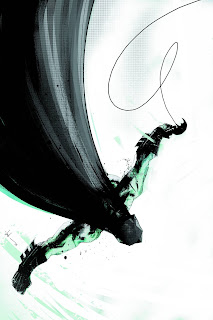 Recent issues of Batman have seen Jim Gordon's robot-suit Batman track down a mysterious villain, Mr Bloom, who is running around Gotham giving super-powers to warring gang members. To reveal just how long Bloom's plans for Gotham have been simmering, issue #44 - released this week - jumps all the way back to the start of Batman's second year, and Bruce Wayne's investigation of a dead body abandoned on the city limits.

This is a stunning single issue of Batman that simultaneously fills in back story on the current arc while also telling an outstanding self-contained issue in its own right. Contemporary American politics over police brutality and black youths getting shot figure strongly, as do issues of how crime is actually inspired and fed in dense city areas. The story is by Scott Snyder but the script is by both Snyder and Brian Azzarello - whose influence is keenly felt in the narration and the dialogue.

The artwork is by Jock, best known for his work on the DC Vertigo series The Losers, and whose covers accompanied Snyder's original Batman work prior to the New 52. It's a welcome reunion: this is a beautifully illustrated issue with evocative layouts and a clever blend of sketchy hand-drawn artwork and digitally composed text sections.

Comics this good are rare. Pick it up and see for yourself. (5/5)

Under the cut: reviews of The Fuse, Head Lopper and The Wicked + the Divine.

The Fuse is reaching its perihelion - the day when the station is closest to the sun - and that means a "day of chaos" for the police department. This is the second part of the "Perihelion" story arc, and the book is already balancing multiple storylines that are unfolded simultaneously. It involves gansgters, burglars, a serial killer, protesters and terrorists -when you list them it all sounds like an over-egged pudding, but the careful manner in which Anthony Johnston weaves it all together is part of why The Fuse is pretty much the best Image comic being published today. Last year I wrote that this series deserved to a win a Hugo, and you guys didn't even nominate it. So let me repeat: this series deserves to win a Hugo. (5/5)

So Head Lopper is the nickname of Norgal, a white-haired barbarian who carries the talking head of a witch in a sack. He has arrived on the Isle of Barra to fight and kill monsters. This is an exceptional first issue: it's a quarterly comic running at about four times the length of a standard comic book, with striking simple artwork and a wry, absurd tone. It reminds me an awful lot of Lewis Trondheim's Dungeon and Ralph Azham, which is only ever a good thing. I love the content and I love the contents and the presentation - which makes the whole thing feel like some great pulp. (5/5)

This is one hell of an experiment: the entire issue is comprised of re-used art from the first 13 issues of The Wicked + the Divine, with a few panels of Sex Criminals thrown in for good measure. It's a neat idea, although to be honest it does sacrifice a little bit of visual impact in the name of experimentation: I, however, can happily live with that because I like the concept so much. The story is far from throwaway: Ananke is refocused considerably, and the entire tone of the series feels as if it's shifting. I honestly have no idea where this is all going, which sometimes - like now - can be a really good thing. (5/5)
Posted by Grant at 5:51 PM