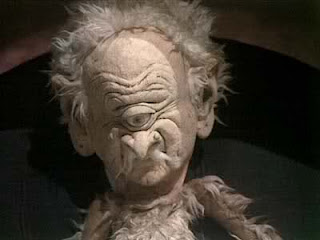 The Liberator is following Servalan's command ship to the very edge of the galaxy, only to have the ship disappear from under their noses. After investigating, Avon (Paul Darrow) and his crew discover a secret planet hidden from view - where a lost Federation battle fleet has stumbled upon a remarkable new technology.

"Moloch" is a dreadful episode, combining re-heated ideas, tedious characterisation and some unpleasant misogyny. It's not a surprise to discover the script is by Ben Steed, whose earlier episode "The Harvest of Kairos" seemed similarly obsessed with manly men treating women like objects. This time around he has them beaten on-screen and adds allusions to gang-rape as well. It's pretty much impossible to get past how horribly written and unnecessary these sequences are; to be honest, the rest of the episode's failings are a moot point.

The whole conceit of the Liberator tracking a Federation vessel out to the edge of the galaxy and finding a hidden planet there was already done in Season 2's "Horizon". Add in "Star One" and this is actually the third time the Federation's hidden a critical base somewhere on the edge of the spiral arm. Mind you, credit where it's due: despite Servalan (Jacqueline Pearce) turning up, at no point does she actively attempt to commandeer the Liberator. There's also a neat little scene where Servalan finds herself teamed up with Vila, which is both pretty funny and fairly refreshing.

Servalan's walked into a bit of a trap: she came looking for a lost Federation battle fleet, and has found its commanders living as the rulers of the hidden planet, harassing and beating up its indigenous inhabitants - of whom we only meet a few, and they all appear to be beautiful long-haired women. These commanders in turn appear to be ruled by the mysterious Moloch, which at first appears to be a hyper-advanced computer but actually turns out to be a genetically engineered future human performed by a ridiculous looking puppet with the voice of Deep Roy. It is a truly laughable puppet, and tops even the ridiculous spider-crab creature from "The Harvest of Kairos" to win "worst-looking effect of the season". It even has a bushy little moustache.

The regulars don't get too much to do either. Dayna and Avon are present, but not particularly active. Cally stays behind to operate the teleport controls (it's Season 2 all over again). Vila does get some decent scenes, but most of them are paired with a Federation convict named Doran. Doran's initially pitched as a jovial drunkard, but before long he's as grossly unpleasant towards women as the rest of the guest male cast. Tarrant has switched back to thug mode this episode, at one point even threatening Vila with a gun.

This is a terrible episode, not simply because it's loaded with misogyny or because its ambition vastly exceeds its technical ability, but because it's ultimately not about anything. It's a group of assorted plot threads that flail about for 50 minutes before the credits run. Every time I come back to this episode over the years I struggle to remember what it's actually about.

We're 11 episodes into Season 3, and six of the episodes have been good. The quality ratio slips back down to 55 per cent.
Posted by Grant at 5:04 PM