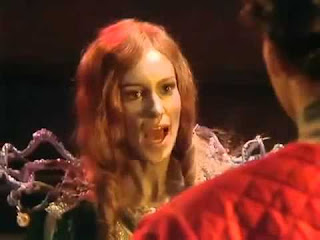 The Liberator comes across an alien spacecraft floating adrift in space. When Cally (Jan Chappel), Avon (Paul Darrow) and Vila (Michael Keating) teleport onboard they discover it is a tomb. They return to the Liberator - only an alien intelligence has followed them back, and threatens to take over the ship.

"Sarcophagus" is the first of two scripts written for Blake's 7 by fantasy author Tanith Lee, the only woman to write for the series. It's a strikingly different episode to anything before or since. This is partly because - a few early scenes aside - the entire episodes takes place on the Liberator with only the five regular characters appearing. It is also because this is for all intents and purposes a supernatural fantasy: Cally has become possessed by an alien ghost, who uses poltergeist-like powers to threaten the crew and drain the Liberator's power.

For me that simply doesn't work. Blake's 7 always seems to struggle slightly when its storylines shift away from the Federation and towards aliens of one form or another. This is, in fact, the only episode out of 52 in which the Federation isn't as much as mentioned. What we have left is remarkably slight: there's a threat to the Liberator that only really becomes clear in the last 15 minutes, and it's a threat that Avon resolves with remarkable ease. Everything else is just padding.

Jan Chappel does do some great work as both Cally and the alien ghost, and the script does seem to make a cursory attempt to reference the recent decimation of her home planet Auron. It also highlights an unspoken attraction between Cally and Avon, which sadly never gets mentioned again in the series. Avon too gets some strong dialogue, and Paul Darrow does a rather understated job with the character this time around.

Unfortunately the other three characters aren't nearly as well served. Dayna has suddenly taken up playing a harp, because Lee's script requires each of the Liberator crew to fall into a sort of thematic archetype and Tarrant had already bagged the role of the warrior. These archetypes are strange - the episode keeps slipping into surreal fantasy sequences with each of the regulars in lycra costumes: Tarrant as the warrior, Dayna the musician, Vila the jester and Avon as a Bergman-esque Death. It's creative, but in the context of the series overall I really don't think it works.

Tarrant's characterisation dives off a cliff in this episode into outright unpleasantness. At first I assumed the alien intelligence was manipulating the characters' personalities, but by the end it becomes clear that this isn't really the case. Tarrant is hostile and suspicious about Cally, and then comes dangerously close to a physical altercation with Avon. He bullies Vila and even bluntly orders Dayna around. He is such a weirdly inconsistent character that it's rather difficult to enjoy his presence in the series at all. There's also one scene in Cally's quarters where he's visibly reading huge tracts of dialogue off cue cards just out of shot.

"Sarcophagus" is a very bold and inventive episode, which should be applauded, and it tries something entirely new. It's simply a fact of this kind of invention that sometimes it doesn't work. I appreciate the effort and talent involved, but ultimately can't pretend it was enjoyable to watch. I think the production team were probably aware of just how far over the edge this episode went in terms of surreality and non-realist drama; there's an excruciating coda here where Dayna explains the plot to Vila, just in case any viewers found it all too much to work out.

We're now nine episodes into Season 3, with five good ones and four bad. The quality ratio drops to 56 per cent.
Posted by Grant at 9:29 AM