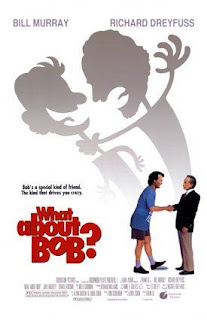 Dr Leo Marvin (Richard Dreyfuss) is a highly successful psychiatrist with a new book just releasing, a Good Morning America interview lined up, and a quiet vacation in New Hampshire all lined up and ready. Bob Wiley (Bill Murray) is a clingy neurotic with multiple phobias who has just secured Dr Marvin as his new doctor. When Marvin goes on vacation Bob doggedly follows him, ingratiating himself into his family life and sending the ego-fuelled Marvin over the edge.

What About Bob? was a sizeable commercial hit back in 1991, although weirdly it hasn't received a home video release in Australia for some years. Finding a second-hand American DVD in a jumble sale has allowed me to rewatch this Frank Oz comedy for the first time in quite a while, and to see how well it stands up.

The answer is: mostly pretty well. It's a very commercially-minded film, with a script that can often get a little irritating, but the production is saved and then some by canny casting and two excellent central performances.

This is Dreyfuss and Murray's film, through and through. It is their characters and their interactions that fuel the majority of the comedy, and upon their shoulders that the film succeeds or fails. For Murray the film is largely an excuse to do the sorts of broad comedy at which he excels. I've certainly seen him do much better work, but even when largely running on automatic he's an immensely funny actor. What makes him seem particularly funny in this case is the superb way in which Dreyfuss bounces off him. Of the two I think it's Dreyfuss who's doing the most interesting work here, developing a character who's wound up tightly with ego from the get-go, and just gets wound more and more tightly as the film goes on. The dynamic is perfect, with the loose, relaxed neurotic needling away blindly at the increasingly tense egomaniac until it all explodes during the film's third act. Apparently Dreyfuss and Murray did not personally get along while shooting the film, but if true it's a tension that has actually benefited the performances. To be honest the remainder of the cast - particularly Marvin's family - exist purely to service the comedy between the two leads.

While there are plenty of laughs in the film's earlier scenes, by the climax it all has a tendency to go off the rails. There's a pronounced shift during the film's last 20 minutes that abandons reasonably naturalistic comedy in favour of more over-the-top and unbelievable moments. This weakens the film, and of course the climax is often the hardest bit of a movie comedy to get right. It's a shame Oz didn't manage to pull it off here.

All in all there are sufficient laughs to make What About Bob? an entertaining enough watch, and there's a wonderful performance by Richard Dreyfuss at its centre. At the same time it's simply not quite good enough to break out from being an enjoyable film to being a classic film - that's a shame, because at times it really seems like What About Bob? got teasingly close.
Posted by Grant at 7:34 AM