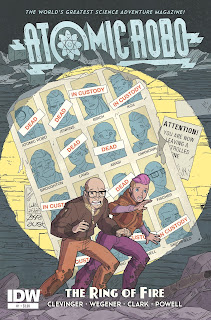 With Atomic Robo, Brian Clevinger and Scott Wegener created an outstanding pulp hero; arguably the best that comic books had produced since the Rocketeer. He's a robot created by Nicola Tesla who fights giant monsters, other robots, evil dinosaur super-villains, and any number of other weird, delightfully strange enemies. The character originally appeared in a string of independently published miniseries, but more recently has been operating as a webcomic. Now IDW has stepped in to publish those webcomic issues in print, beginning with the first issue of Atomic Robo and the Ring of Fire.

Each miniseries takes place in a different historical period over the last 100 years or so. This one is comparatively rare in that it takes place in the present day. It begins with Robo apparently dead, and his allies scattered and in hiding. Getting back together and realising Robo may actually still be alive is the premise of this issue.

There's a lot of back story but to be honest it's covered pretty well. There are details and references that new readers won't get, but to be honest I'm not sure any of them are going to get too far in the way. This is a fast-paced, fairly busy first issue that ends at a great cliffhanger. While I was happy to see the book continue in digital form, I can't lie that there isn't something nice about seeing it in print as well. Existing fans will be happy to see Robo back. Newcomers are in for a treat. (Cute X-Men reference on the cover too.) (4/5)

This comic is unadulterated continuity porn. There is absolutely no reason to read it unless you are a hardcore fan of both Star Trek and Green Lantern, and even if you have a love for both of those properties you're then going to need to favour continuity references and check-box style cameos over a serious or extensive plot. This issue juggles Sinestro teaming up with the Klingon General Chang, Larfleeze teaming up with a Romulan senator, Atrocitus teaming up with a Gorn, the command crew of the Enterprise all manipulating different coloured rings, and Nekron turning up in the Alpha Quadrant. It's often cute, but also very silly and - if I'm to be honest - not outrageously readable. I think a smaller cast would have served this crossover much better. (2/5)

Fumetti is a style of comic book, originating in Italy, that uses photographs rather than drawn artwork to express a graphic story. John Byrne, fascinated by the process, undertook an experiment a few years ago to create a comic story using screen captures from old episodes of Star Trek. It was popular enough that IDW started publishing them - this is the latest issue. It's a rather charming sequel to the episode "What Are Little Girls Made Of", with Kirk encountering a duplicate of the android Andrea on a pleasure planet. It even features a guest appearance by 30 Rock star Scott Adsit, photoshopped into the original artwork after posing for a series of photographs. This is a wonderfully odd sort of licensed comic book - I love that IDW are willing to publish it. (3/5)

At the height of the Vietnam War an American officer, who has just become engaged to a young Vietnamese woman, is assigned to help investigate a double murder in Hue City. Two decades later the experience still haunts him. Tet is a book that jumps back and forth, kicking off a crime story with an intriguing war background. Of course being the first issue it's too early to see if the crime being investigated is dramatically satisfying, but as an initial hook this issue works a treat. Paul Tucker's sketchy artwork is a great match for Paul Allor's script. I'm very keen to see where this comic goes from here: it's a fresh take on a woefully underused genre. (4/5)
Posted by Grant at 5:04 PM