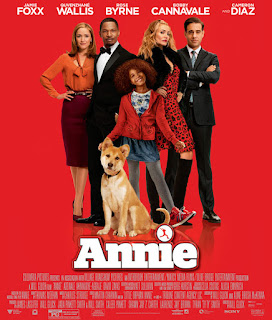 Annie begins with a cloying and irritating red-headed young moppet do a twee little song and dance in a classroom, before she sits down and is replaced by another Annie: African-American, smart, inventive and outgoing. Within seconds she's hooked her entire close into a rhythmic musical presentation about how great F.D. Roosevelt's Presidency was back in the 1930s. It's a scene with multiple angles at the same purpose: here is Harold Gray's Little Orphan Annie, re-imagined as a contemporary African-American story and thus much cooler than the lame 1982 film, but still with one eye firmly on its roots. It also carries a second, unintentional message, which is that this is a remake that is trying much, much too hard.

Annie (Quvenzhane Wallis) is a foster child living with a group of girls in the dismissive and cruel care of the drunken Miss Hannigan (Cameron Diaz). A chance encounter with billionaire and mayoral candidate William Stacks (Jamie Foxx) leads to her being temporarily taken into his care.

I should admit going in that I am a fairly keen fan of Gray's original Little Orphan Annie newspaper strip. It has a beautifully haunting aesthetic, since Gray never gave his characters eyes. They all stare out blankly from white empty orbs while fighting criminals, stopping low-level scams and beating up unsavoury types. It's quite a gritty newspaper strip, all things considered, but then of course most of the strips from that period usually were. There was even a fair measure of sharpened social satire: billionaire Oliver Warbucks was a war profiteer, for example, hence his name being a pun on "all of our war bucks".

Certainly the 1977 Broadway musical and its subsequent 1982 film adaptation brightened Annie up immeasurably. Ironically the musical and film infused Annie's story with the optimism of FDR's "new deal". In writing the original strip Harold Gray so loathed FDR's interference with free enterprise that in 1945 he had Warbucks promptly drop dead on the spot, unable to survive without what Gray considered a proper free market (he spontaneously returned to life as soon as FDR himself had died). I happen to think Annie is a pretty good musical: notably it has at least three genuinely good show tunes in "Tomorrow", "It's a Hard-Knock Life" and "Little Girls", and despite a generally sweet tone still retain some of Annie's original roughness and propensity for action.

So now we have a fresh interpretation of the musical, It's slightly odd, in that it updates the film to 21st century New York and re-casts Annie as a person of colour, and replaces Oliver Warbucks with William Stacks (as in 'stacks of bills') played by Jamie Foxx, but at the same time pulls off the last vestiges of Annie's original grit. It's odd because that opening scene with the fake red-haired Annie suggests the original Annie is twee and irritatingly wholesome, whereas its own re-envisaged Annie is pretty much the most wholesome iteration of the character so far. It's a film that doesn't seem to know what it wants: on the one hand it superficially tries to give the property an edge and a contemporary relevance, while on the other it effectively strips away any elements that actually gave the property an edge in the first place. Even the villainous Miss Hannigan (played fabulously by Carol Burnett in 1982, and less fabulously by Cameron Diaz here) is given a redemption story.

The songs have been updated and remixed - in pretty much every case in an inferior fashion - and some fresh numbers added. It's done with clear enthusiasm and thought, but it simply doesn't work. Quvenzhane Wallis and Jamie Foxx are both great, and naturally entertaining performers, but they're in a movie that just isn't as good as they deserve. When the climax comes it feels arbitrary and tacked-on.

I think the biggest problem is that Little Orphan Annie is of its own time. It is a product of the Great Depression, and an artistic response to it. The new film pays lip service to the current global financial instability in its opening scene, but it's a very weak and unconvincing link. This film's biggest mistake is that it brings Annie into the 21st century, only to discover that in this century she doesn't actually have anything relevant to say.
Posted by Grant at 1:39 AM