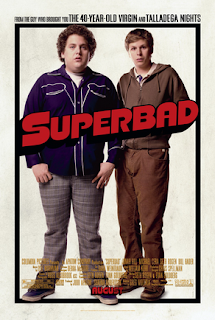 Seth (Jonah Hill) and Evan (Michael Cera) are two high school seniors desperate to lose their virginity at an end of school party. Seth is obsessed with Jules (Emma Stone), Evan with Becca (Martha MacIsaac). Both are relying on their friend Fogel (Christopher Mintz-Plasse) to use his fake ID to get alcohol, but a string of events sees Seth and Evan caught on an odyssey through suburbia while Fogel finds himself hijacked by two wayward police officer (Seth Rogen and Bill Hader).

I am huge fan of the teen comedy as a film genre, however it's a genre with a fairly treacherous landscape. The themes and tropes of awkward sexuality, first love, teenage angst and self-realisation are all rich veins of material for writers and directors to mine, yet they're also wide open to lazy abuse. For every Ferris Bueller's Day Off there's a She's All That, or a Can't Hardly Wait. Indeed a quick glance at Superbad's premise - essentially three nerds hoping to lose their virginity at a party - suggests it's going to be the worst example of the genre. Thankfully a combination of a canny screenplay, well-timed direction and strong lead performances make Superbad one of the very best examples of its kind. It's crude and often-times a little painful to watch, but it's also heartfelt and honest. Personally I think it's a minor classic.

The screenplay was written by actor Seth Rogen and his writing partner Evan Goldberg, and was based largely on their own teenage experiences growing up in Canada. The autobiographical nature of the film even extends to the protagonists' names - Rogen and Goldberg even used to hang out with a kid named Fogel. It feels autobiographical. Even when events are exaggerated for comedic effects, there's a sense of truth about them.

Director Greg Mottola has cast the film brilliantly, favouring believable-looking actors over Hollywood-style starlets. This realism extends to the performances. The central cast do an exceptional job giving their characters depth and nuance, particularly Jonah Hill who manages to keep Seth likeable even while occasionally doing and saying stupid, adolescent things. Michael Sera is also great as the permanently awkward, nervous Evan. Emma Stone also makes a remarkable impression as Jules: this was her feature film debut and not a massive part, but even back here she demonstrates an enormous screen presence. It's not a surprise to see how far her career has come in the following eight years.

Slater (Seth Rogen) and Michaels (Bill Hader) are the film's most over-the-top element: two bored police officers who spend the night drinking beer and goofing off instead of keeping the peace or investigating crimes. To an extent it does feel as if they've been included purely to give Rogen a role in the film (he originally hoped to play Seth, but a protracted seven-year development period led to him being too old for the part). In isolation the sequences where Slater and Michaels take Fogel with them throughout the night work fine, but they do struggle a little to match the more grounded, teenage sequences of Seth and Evan attempting to reach Jules' party. All in all, however, it feels like a minor criticism.

Superbad is packed with funny jokes, memorable moments, a great funk-based soundtrack, and likeable characters. Even its epilogue, which initially feels oddly protracted, winds up being a wonderful and bittersweet conclusion. Every time I watch it I laugh all over again, and every time I'm surprised at just how much soul it packs in underneath the surface.
Posted by Grant at 9:48 PM