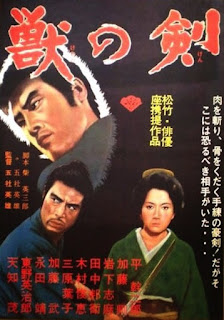 Hideo Gosha is one of the more obscure legends of Japanese cinema. Most filmgoers in the English-speaking world have heard of Akira Kurosawa, or Hayao Miyazaki, and quite a few will stretch to Yasujiro Ozu or Kenji Mizoguchi. Gosha remains comparatively obscure, mainly because it has only really been in the last few years that his films have been widely available on home video.

He started his career in television, primarily in creating and directing the chanbara (samurai action) series Three Outlaw Samurai. At the time there was an informal agreement between Japan's film studios not to use television directors in the making of their films. It was when Shochiku chose to produce a big-screen prequel to Three Outlaw Samurai that this rule was finally broken, with the studio defying their rivals and inviting Gosha to direct it himself. From there he went from strength to strength, directing a series of hard-edged, visually sharp chanbara films that still hold up today as some of the finest examples of the genre.

Sword of the Beast is one of them, telling the story of a ronin Gennosuke (Mikijiro Hira) who has murdered one of his superiors and is on the run from the victim's vengeful daughter and her fiancée.

Gennosuke is a fascinating protagonist, played with a wonderful intensity by Hira (one of the stars of Three Outlaw Samurai). He is a deeply honourable man, and flashbacks and conversations rapidly demonstrate that he murdered his clan's counselor out of a misplaced sense of duty rather than malice. He was effectively framed and betrayed by another samurai, bringing the entire honour-based system of samurai society into question. This sort of distrustful cynicism is typical of Gosha's work: born a generation after the likes of Ozu or Kurosawa, his works directly challenged the old-fashioned ideals of blind obedience and clan loyalty that led to Japan's runaway nationalism and imperialist expansions in the 1930s.

It is, then, a subtly political film, but it's also a violent and reasonably garish pulp fiction. A lot of people get cut down in sword fights, and the dialogue is terse and to the point. Women are not very well served by Gosha's story. Although all three female characters are well performed and sympathetically written, it's difficult not to notice that by the film's conclusion two have been brutally murdered and a third sexually assaulted. The film sits uncomfortably on a line for me: I'm unsure whether it's depicting misogyny or indulging in it. Possibly both. It's a sign of the time in which the film was made, but historical context can only take you so far.

The film is visually arresting, with Gosha using liberal amounts of tracking shots, rapid cuts and low camera angles in short contrasts to the general aesthetic of Japanese cinema at the time. There is an energy to his works that is fully evident here, as well as a rich use of space in each shot. Gosha works his location shoot to full benefit, with some shots - particularly along an inn's balcony - displaying beautiful mountainous vistas in the background.

Thanks to the DVD and blu ray releases by the likes of Criterion, Hideo Gosha's films are finally getting the attention they deserve. He is a significant and worthy figure in the history of Japanese cinema, and there are few finer examples of his work than Sword of the Beast.
Posted by Grant at 9:15 AM