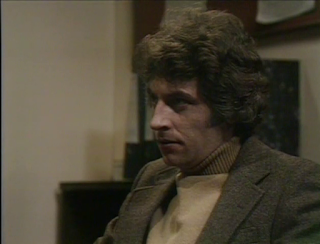 Journalist Tom Crane (James Hazeldine) continues to explore his newly-discovered psychic powers while working with Dr Anne Reynolds (Louise Jameson) and Dr Roy Martindale (John Carlisle) at the government's Department 7. When Tom's brother Michael, who is supposed to be in Germany, is found deranged and rambling in rural Scotland, Tom is driven to investigate despite both Anne and Martindale's warnings.

"Night Games" ends in a dramatically strong place. Tom's brother appears to be the victim of a government conspiracy, that conspiracy appears to involve Drexel (the man who murdered Tom's wife), and there may be a mole inside Department 7. It's a shame that the episode struggles so much to get there.

There is a solid idea behind Nick McCarty's script: a secret military weapon being tested, its operator secretly brainwashed to sabotage the experiment, and soundwaves triggering visions of past history in the minds of the test subjects. The problem is that the idea never gets properly articulated or explored. Much of the episode feels like padding. The parts that don't feel more than a little confused.

James Hazeldine is a strong lead and makes for an amiable protagonist. Sadly this episode partially sidelines Louise Jameson as Anne Reynolds, which is to its detriment since Jameson and Hazeldine's screen chemistry is part of what made the first two episodes of this series so entertaining. John Carlyle continues to impress as the suspicious Dr Martindale - three episodes in and it's still impossible to tell his true motives or if he has Crane's best interests at heart.

There is some nice direction by Ken Grieve, taking advantage of location shooting to make the scenes of Crane's visits to a British Army base dynamic and eye-catching. Sadly strong direction isn't enough to save the episode from its muddled script. Three episodes in, and The Omega Factor hits its first misfire. The quality ratio slips to 67 per cent.
Posted by Grant at 12:52 AM