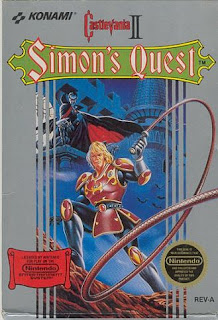 One of the best things about videogames as a medium is that they are so perfectly placed for iterative improvements. A game can be developed and released, and when a sequel is produced it can take on-board feedback from reviews, market sentiment, ideas that the developers always wanted to include in the original, and so on.

Castlevania II: Simon's Quest is a typical example of this sort of iterative improvement. All of the elements that made the original game great have been kept, but a whole pile of new improvements and featured have been added. There is a day/night cycle: fight through a level during the daylight hours and the monsters will be weak and vulnerable. Fight through the same level once night falls and the monsters are reinvigorated and powerful.

The game has become non-linear, using a map function, so the player can decide which of the five main dungeons he or she wishes to tackle in which order. Villages can be visited, residents talked to, and supplies and power-ups purchased. There are even three different endings to the game, based on how successfully and how rapidly the player completes things.

The game wasn't perfect: a poor translation of the original Japanese dialogue rendered many of the hints offered by the game's villagers and nonsensical, or occasionally actively counter-productive. A surprisingly large number of typographical errors also crept in. Then again, few games are perfect: with an online walkthrough in hand for the trickier bits, Castlevania II is a wonderful gaming experience and a huge progression in content and gameplay from its predecessor.
Posted by Grant at 5:11 PM