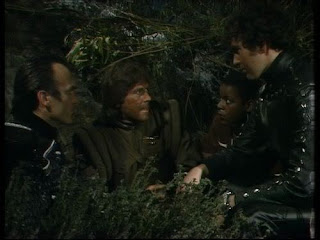 When a resurgent Federation manages to re-conquer the planet Helotrix, Avon (Paul Darrow) decides to find out precisely how they're managing to expand their territory so rapidly. Tarrant (Steven Pacey) and Dayna (Josette Simon) teleport down from Scorpio, only to find a rebellion in full swing, a new drug control system that is making the local population incapable of fighting back, and the unexpected return of a familiar face.

"Traitor" is an odd episode. Certainly it's an enormous improvement over the previous two episodes, thanks mainly to much stronger writing by British telefantasy icon Robert Holmes. On the other hand it feels oddly cursory and slightly rushed - less like a brilliant episode in its own right, and more like a rough draft of that brilliant episode. The plot is good, and the characters nicely complex, but it all feels as if it needed a little more time in development before it was produced.

It's nice to return to the overall series storyline of the fight against the Federation. It drove the first two seasons of the series, and to an extent was sidelined in Season 3 in favour of "out there" space fantasy and Servalan's regular attempts to capture the Liberator. Now Avon discovers the Federation's latest weapon - the immensely successful drug Pylene 50 - and decides he can't stand by and allow the Federation to expand any further. The overall story arc of Season 4 kicks off here: sick of running, Avon now has a ship and a base, and seems intent upon using them. After so much time mocking Blake's idealism, he's accidentally fallen into the trap himself.

This is, however, Tarrant and Dayna's episode. They're the ones who make contact with Hunda (Robert Morris) and his rebels, and who recover a treatment for Pylene 50 from its crippled creator Forbus (Edgar Wreford), and who ultimately see Servalan (Jacqueline Pearce) - seemingly returned from the grave.

It's that classic trope of melodramatic drama: if you didn't see the body, the villain isn't necessarily dead. I can accept the idea that Servalan somehow escaped the Liberator's destruction, but her new identity as Space Commissioner Sleer is more difficult to swallow. Her military dictatorship that started back in "Star One" is at an end, and the old High Council - it's survivors, anyway - have re-asserted control. Presumed dead, and likely to be executed if discovered alive, Servalan has taken on a new identity and is systematically eliminating anyone who could recognise her from her former life.

I have a huge problem with that idea: Servalan was President of the Federation, and visibly undertook that role with enormous ego and excess. The idea that she could simply change her name and kill a few officers and politicians to secure her anonymity beggars belief. After a fairly shaky Season 3, her characterisation now seems to have settled into a blend of earlier versions: she's still a slinky, overtly sexualised character, but the steely resolve and cold-blooded heart remain as well. Despite the ridiculous premise involved in re-introducing her, I am happy to see her back.

As for the rest of the episode it's a very well thought-out blend of guerilla warfare, office politics and contextual framing. For some reason it simply doesn't quite gel together. It's interesting without being gripping. It does a great job of setting up the Federation's new status quo - and the Pylene 50 plot will be picked up down the line - but it's only partially successful at being an enjoyable episode in its own right.

Still, partial success is still some kind of success. Despite its faults I do enjoy "Traitor", even if its writer was clearly capable of providing more. Three episodes into Season 4, and one has been good: the quality ratio rises to a meagre 33 per cent.
Posted by Grant at 6:06 PM