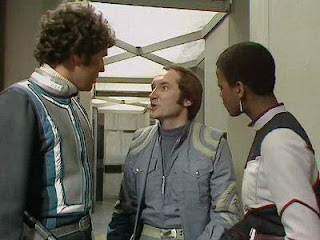 Soolin (Glynis Barber) has vanished after Dorian's death. Vila still can't get through the sealed hatch to the Scorpio, and there's an explosive charge ticking down the hours that will destroy the entire base if Vila can't get it open. Avon (Paul Darrow) has gone searching for crystals to help manufacture a new teleport system, but has instead been captured by the Hommicks - an ingidenous all-male tribe locked in the dying days of a war with the all-female Seska.

Writer Ben Steed returns for the third and final time to Blake's 7. His first script, "The Harvest of Kairos", focused on Jarvik, the manliest of manly men doing manly things while shouting at women about how manly he was. His second script, "Moloch", featured crass misogyny and women being dragged away to be sexually assaulted. For his final script Steed goes all out, writing a literal "war of the sexes" in which men emerge victorious and women apparently get taught their proper place.

It's difficult to review much else in the episode because the attitude seems so vile. It's not simply the ridiculous set-up in which large bearded men in medieval outfits war with slightly, feminine young women: it's the fact that Avon actively becomes involved in the conflict and not only strikes and later kills the lead Seska, Pella (Juliet Hammond-Hill), but explains to her that men will always be superior to women. Avon has always been a nicely troublesome character - cynical, self-interested, murderous - but now he's an active misogynist as well. There have been hints of these attitudes in past episodes, but it's never been so overtly and definitively expressed.

Ben Steed appears to portray the Seska as comparatively unlikeable radical feminists, who'd rather destroy men entirely than live with them. The Hommicks, for their part, capture the Seska and surgically remove the collars that enable them to exhibit telekinetic powers. The episode makes it clear through dialogue that, once surgically altered, the victims are no longer Seska but 'women', as if the removal of feminist sentiment makes them legitimate people again.

There's also a very weird moment during the climax, where one of the two Seska observing Dayna's knife-fight with Gunn-Sar declares 'let the black girl win'. It's an oddly specific description, since Dayna is the only woman fighting, and while I may be forgetting I'm reasonably sure it's the only time Dayna's skin colour is referenced in the entire series.

So let's keep all that in mind, and acknowledge already that "Power" is not a good episode. Moving beyond that, there's actually some genuinely funny dialogue going on here. Dicken Ashworth is great at the Hommick leader Gunn-Sar, jumping weirdly between loud, aggressive bluster and a sort of laconic boredom. He shouts and rages, but then bickers with his aide-de-camp Cato (Paul Ridley) over the number of challengers he's murdered. He leads a tribe of anti-women warriors yet seems to show genuine affection for his ex-Seska wife.

Back over at Xenon base, Vila (Michael Keating) has an entertaining time meeting Pella and then failing to convince Tarrant (Steven Pacey) and Dayna (Josette Simon) that she exists, while also striving to unlock an unlockable door before a nuclear compression charge kills them all. As a follow-up to the events of "Rescue" it's mostly effective. Soolin (Glynis Barber) makes a last-minute appearance to join Avon's team, but she remains almost completely undeveloped as a character.

Despite some occasionally engaging moments, "Power" is a dreadful episode. It's the second bad episode in a row for Season 4. The production values are up (the new teleporter effect looks great), the characterisation of the leads is as solid and consistent as it's ever been, and all that's missing is some decent storylines to which to apply them.
Posted by Grant at 5:07 PM