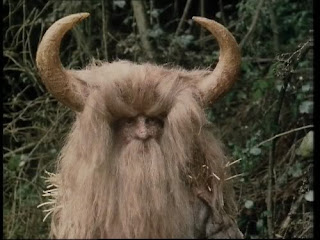 Dayna (Josette Simon) teleports down to the surface of Bucol II to meet with Justin (Peter Byrne), a talented geneticist who used to know her father. Meanwhile Scorpio is ambushed by a Federation patrol, forcing Tarrant (Steven Pacey) to retreat back to Xenon base for repairs - and leaving Dayna stranded. She is horrified by Justin's experiment: creating his own humanoid beast-like species to work as a slave race for humans.

Let's jump right into the most egregious problem with "Animals". The episode focuses in the main on a growing romance between Dayna and Justin. She knows him because he used to tutor her in her childhood. There was clearly a romantic attraction then, and it's rekindled now. The only problem is that Justin is visibly in his mid-50s and Dayna is visibly in her early 20s. It's difficult to imagine their earlier attraction - possibly even an affair - as inappropriate at best and criminal at worst. The creepiness is not helped by Peter Byrne's weirdly obsessive portrayal of Justin. He constantly stares at Dayna, and leaves ominous heart-felt pauses in the middle of scenes. At its core "Animals" is a romance, and it's one that fails completely.

The episode gets sillier. For one thing the noted scientist in a far future civilization has the name Justin. For another his genetically engineered creations have enormous horned heads for no readily apparent reason. Servalan (Jacqueline Pearce) continues to assassinate anybody she meets who recognises her as the Federation's former President - which, let's be honest, must be a fair proportion of all of the humans in the entire galaxy.

It's a nice piece of episode-to-episode continuity to have Tarrant's high speed escape from a Federation patrol grab the attention of Servalan - still masquerading as Commissioner Sleer - and lead her to Bucol II herself. Sadly once there her actions make rather less sense. She she promptly captures Dayna and brainwashes her into hating Justin, then convinces her to go to Justin and open the door of his laboratory to let Federation troops inside, and then re-brainwashes Dayna into loving Justin again. All of this to capture Justin and take his research - although why the Federation wants radiation-resistant horned alien beast-men is never properly explored or explained.

While all of this goes on, the remainder of the regular cast make repairs to Scorpio, which seem like a weird attempt at both padding out a slim plot and utilising four actors who aren't really needed but were going to be paid under their contracts anyway. There's some nice character work in those scenes that make me wonder if script editor Chris Boucher inserted them when Allan Prior's script ran short.

When Avon, Tarrant and Soolin finally teleport down to Bucol II to save the day, Paul Darrow masterfully recovers from a near-catastrophic set mishap. Watch him as he pointlessly breaks down a door, kicks over a chair and then very nearly slips and falls over. The most hilarious part of the whole sequence is that there's a wide open door to the jungle outside on the other side of laboratory room.

"Animals" was Allan Prior's final script for Blake's 7. Given that his earlier scripts were "Horizon", "Hostage", "The Keeper" and "Volcano" he will hardly be remembered as one of the series' better writers. This is a terrible episode: terribly written and terribly designed, and hampered by a creepy guest performance precisely where charisma was required. Season 4 really seems to be letting the series down. The first three years of the show were remarkably consistent in that each season had eight decent episodes and five stinkers. We're only five episodes into Season 4 and we've already had four bad ones - either the rest of the season is going to be excellent, or Vere Lorrimer's tenure as series producer really isn't a match for David Maloney's. The quality ratio drops down to 20 per cent.
Posted by Grant at 1:23 AM