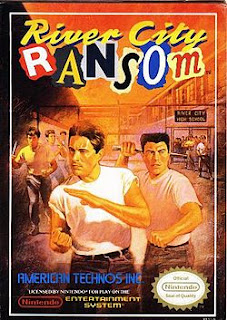 In 1986 Taito released an arcade game developed by Technos Japan titled Hot-Blooded Tough Guy Kunio - titled Renegade internationally. While not a massive commercial success, it introduced several key elements of the beat-em-up genre, including four directional movement, an ability for a character to choose between punching, kicking and jumping, and waves of enemies who took more than a single hit to defeat. These elements were all put to much more successful use a year later in Taito and Technos' Double Dragon.

The success of Double Dragon didn't deter Technos from revisiting the characters in Renegade. Kunio-kun returned in the 1987 arcade game Hot-Blooded High School Dodgeball Club (released internationally as Super Dodge Ball), and then in the 1989 Famicom game Downtown Hot-Blooded Story. This third title was ported to the NES in the USA in 1990, under the title River City Ransom, and for the NES in Europe in 1992, under the title Street Gangs. 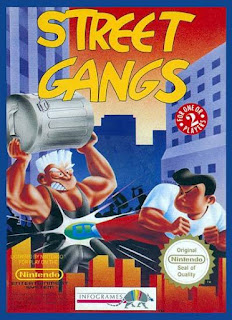 The NES edition focuses on high schoolers Alex and Ryan as they fight members of a rival teen gang whose leader, Slick, has kidnapped Ryan's girlfriend. It's a side-scrolling beat-em-up in the tradition of both Renegade and Double Dragon, albeit with slightly deformed and cute 'chibi' characters. It also has an unexpected amount of depth.

In addition to beating up waves of gang members with a combination of kicks, punches and improvised weapons, players could choose which direction to walk in a tree-like level structure. In between gang fights, players could visit streets of shops and buy power-ups with cash taken from defeated enemies. Buying books and manga improved fighting abilities. Eating pancakes and sushi improved each character's statistics.

Despite changing the names to make them sound American, much of the game was translated to English with the original Japanese content intact. The sorts of foods and goods one could buy were primarily Japanese goods. The graphics and building design all looked specifically Japanese. It made the game stand out a mile when it was released in Australia back in 1992. 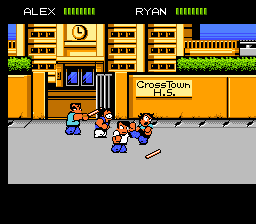 This is in many ways a simple brawler, but it's one with surprising depth for the period in which it was released. It has developed a fairly robust cult following over the ensuing decades, as new players discover the title through emulation or ports to Nintendo's Virtual Console.

Back in Japan, the Kunio-kun franchise has gone from strength to strength, racking up 41 more games (including compilations) since River City Ransom. The most recent, Downtown Nekketsu Jidaigeki, was released for the Nintendo 3DS back in May 2015. While it's a shame that most of the games in the series have never been translated, we can at least enjoy those that have - and none are as enjoyable as River City Ransom.
Posted by Grant at 5:17 PM