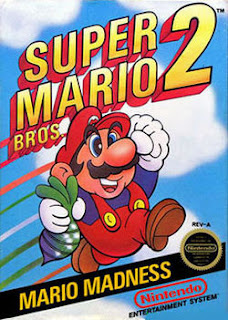 Super Mario Bros was the kind of hit game that didn't just sell well - it reshaped the landscape of computer games. After selling millions of copies, and driving sales on both the Famicom in Japan and the NES internationally, it was inevitable that Nintendo would have to produce a sequel to satisfy public demand. In Japan they released Super Mario Bros 2 for the Famicom Disk System; it featured the same gameplay as the original but with more challenging level designs. When Nintendo of America assessed the title they feared it was too similar to the original game and too difficult for novice players. As a result they elected to bypass releasing the game altogether and instead setting about releasing a Mario sequel of their own.

Obviously producing an entirely new game from scratch would be time-consuming and cost-prohibitive. Nintendo of America bypassed this problem by simply grabbing a completely unrelated game - the Japan-only Yume Kojo: Doki Doki Panic - and re-working its graphics to make the player-controlled characters look like Mario, Luigi, Princess Toadstool and Toad.

So taken in the context of the Super Mario franchise, Super Mario Bros 2 might come across as a disappointment. The gameplay is significantly different, and slightly more complicated, and it lacks many of the staple features that make all of the other Mario titles feel as if they're part of a cohesive whole. Certainly as a teenager I found the game weird and disappointing compared to the first and third games that preceded and succeeded it. Taken on its own merits, however, and it's a rich and rather rewarding game in its own right.

Forget about jumping on enemies to destroy them. In SMB2 the player can pull turnips and radishes out of the ground and hurl them at his or her foes. The player can even jump on enemies and flip them upside down, and throw them at other enemies. Levels end with boss fights where the player has to carefully time jumps onto eggs being thrown by the villainous "Birdo", then flip the eggs up into their hands and throw them back. The horizontal scrolling design of Super Mario Bros was enhanced with additional levels where the game would scroll vertically instead.

Thanks almost entirely to the Mario brand, this game ultimately sold the fourth-largest number of copies of any NES title after Super Mario Bros, Duck Hunt (both of which benefited from being packaged with the console) and Super Mario Bros 3. It's still very enjoyable today.
Posted by Grant at 9:10 PM