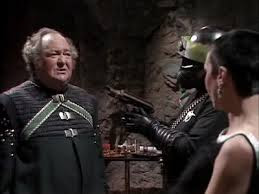 With the future of the galaxy's energy dominated by the use of volatile and immensely valuable feldon crystals, Avon (Paul Darrow) has hatched a plan to steal a batch of the crystals from a mining facility on Mecron II. His only hurdles? The continuing presence of Commissioner Sleer, aka Servalan (Jacqueline Pearce), and the facility controller Belkov (Stratford Johns) - a corrupt official obsessed with laying traps and playing games.

Given the rapidly growing popularity of videogames in popular culture in the early 1980s, it shouldn't come as a big surprise that Blake's 7 would choose to exploit the phenomenon for an episode. The eccentric Belkov has hidden a cache of feldon crystals onboard the "Orbiter", an abandoned space station circling above Mecron II. To access the crystals, visitors must defeat a series of challenges: a shooting game where you duel a replica of yourself, an immersive space flight simulator, and a complex puzzle game. Fail at a game, and it will kill you - and all three seem rigged to ensure nobody gets to the crystals alive. Viewed today, these gaming sequences seem charmingly primitive, and date the episode in a specific manner unlike most other Blake's 7 adventures.

Altogether "Games" is an episode with plenty of solid scenes and storylines, but which ultimately doesn't quite hang together. Belkov is under investigation for corruption by Servalan, and asks Avon to be rescued purely as a means of serving Avon's crew up to Servalan. Avon has teamed up with another corrupt Federation employee, Gerren (David Neal), to try and steal Belkov's treasure. Servalan appears to want to bring Belkov to justice, but there's a fairly strong implication she's there to steal the crystals for herself. It's a nice little web of conflicting and overlapping goals, but the structure of the plot is too loose to properly exploit them.

Stratford Johns makes for an entertaining guest villain, delivering a fairly loose and amiable performance that makes him a rather appealing sort of character. Of course he created the casual air by paraphrasing most of his dialogue, leading to a few mangled lines that actually render the episode's climax into a bit of a nonsense. It's also a solid episode for Vila, who gets to rescue his companions as well as steal a valuable circuit out of Belkov's main computer Gambit. Michael Keating plays the part very well, as always, and he's aided by a script that manages to blend Vila's reluctance to take risks and general cowardice with some competent and useful behaviours. All too often in Season 4 he's portrayed in the scripts as a miserable drunkard; it's nice to have the old Vila back for an episode.

The episode is quite well directly, particularly in a location shoot with some excellent physical action. The moment where Tarrant (Steven Pacey) flips a Federation trooper into a crushing machine, with the resultant bloom of red mist, is pretty much the single-most graphic moment of violence in the series so far.

While the overall episode feels weakly plotted and a tad under-whelming, the individual characters and scenes are all entertaining enough to pull "Games" over the edge. It's at the high-end of mediocre which, given some of the other episodes this season, is actually something of a release. We're eight episodes into Season 4, and three have been good. The quality ratio rises to 38 per cent.
Posted by Grant at 7:22 AM