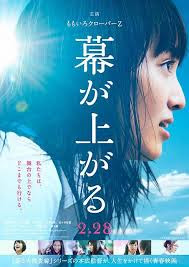 Saori (Momota Kanako) is an under-confident high school senior pushed by her peers into becoming the new captain of the school drama club. While she struggles to lead a group of enthusiastic young women into competing in the national drama championships, she receives unexpected help from the school's new art teacher (Kuroki Haru) - who turns out to be a prematurely retired professional actress.

You know the drill: When the Curtain Rises is yet another movie about a mis-matched group of aspiring youngsters bonding together in an attempt to win the a capella championship. Or the sumo championship. Or the junior baseball league. Or, in this particular case, a drama contest. It's a very familiar story, and seems to be one that's particularly popular in countries like Japan. In true Japanese fashion, however, this film is less about getting the team to work together and much more about overcoming self-doubt. It's quite a slow film, and most of its dramatic beats are incredibly well-worn, but overall this is a surprisingly satisfying and gentle high school drama.

As someone who studied drama as a teenager and well into my twenties, there's a lot in When the Curtain Rises that strikes a familiar chord. The members of the club sit at a crossroads: play-acting is enjoyable enough, but as the end of the school year approaches and examinations loom, it is a time to sift out the genuine performers from the amateur enthusiasts. Keeping up with the drama group may mean under-performing in the exams and not getting an offer from the best universities: unless you're planning to make a career of acting, why take the risk? This is the crisis that affects Saori. She also angsts over whether or not she's good enough, and is trapped trying to work out whether she wants to act or direct.

She gets a growing amount of support from Yoshioka, the school's new science teacher who turns out to be a former drama club captain and professional actor herself. There's a nice bond between the two characters, and one that develops and concludes in a realistic fashion. There is a lot left hanging by the film's end, which I appreciated - you don't have to see every single plot beat to know that they're coming.

The focus on Saori and Yoshioka does come at the expense of the supporting characters, who ultimately come across more like cyphers than characters. They're amiably played, but perhaps represent a small missed opportunity. They are all - Momota Kanako included - played by members of the popular girl group Momoiro Clover Z, which may be of interest to Japanese audiences but seems unlikely to be of note to international viewers.

In the end When the Curtain Rises is a fairly predictable high school drama. If you've seen any Japanese teen film before and liked it, rest assured this is one of the better ones. If you've seen one and didn't warm to it, this slightly melodramatic effort probably won't change your mind.
Posted by Grant at 12:10 AM