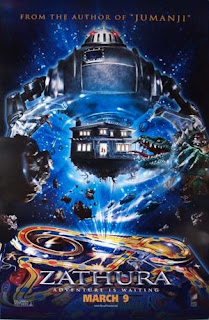 Walter and Danny are young brothers who can't get along. When they're left alone in the house one afternoon, they find an old board game named Zathura in the basement. When they start to play, however, the events of the game start to happen in the real world. Before long they're trapped in deep space, threatened by alien lizards and with only a mysterious astronaut there to help them.

Zathura was originally a children's book by Chris Van Allsburg, which was a sequel to his earlier book Jumanji. Strangely, while the same film studio produced film adaptations of both books they elected to separate them completely. As a result Zathura feels like a weird duplicate of Jumanji: some kids play a mysterious board game that sends them on a thrilling adventure, even though they're completely different kids and the games work in different genres.

Zathura was the third film directed by Jon Favreau, and marks a fairly significant progression for his career. It allowed him to demonstrate an ability to work on a studio project on a tight budget, and successfully producing a genre film with numerous visual effects. From here he went on to Iron Man and its sequel, and Cowboys and Aliens. To direct those films he proved his abilities with this one. Admittedly Zathura was a box office failure, although I suspect that was less to do with the film's quality and more to do with Columbia Pictures releasing it into cinemas one week ahead of a Harry Potter movie.

This is a pretty slight work. It's low on plot, and pretty low of tension or suspense as well. It does take what small story it has been given, however, and tells it with humour and integrity. The performances are solid given their constraints, but admittedly pretty unremarkable. There's more entertainment in watching future movie stars like Kristen Stewart (Twilight) and Josh Hutcherson (The Hunger Games) when they were young, than in actually enjoying them on their own merits. Tim Robbins has a brief role as Walter and Danny's father than he's able to sleepwalk through while collecting a pay cheque. Dax Shepherd is actually pretty good as the anonymous Astronaut summoned to the house by the game, and he helps lift the film's second half considerably.

The real attraction of the film is its visual aesthetic and effects. The whole film has a nice retro style to it, drawing from both the 1950s and 1980s. There are a lot more practical effects used than digital ones, which help to make the various alien and robot characters feel more charming than they would in a lot of other similar films. The reptilian Zorgons in particular are nicely realised and visually effective. Tonally the film wouldn't feel out of place among Amblin Entertainment's numerous 1980s family movies.

The bottom line is that Zathura is a charming small-scale adventure film for kids. It's certainly significantly better than Jumanji, which always struck me as highly overrated, but at the same time it's probably not sufficiently enjoyable to break out too far from its target market. It's a solid Sunday afternoon family movie - and there's nothing wrong with that.
Posted by Grant at 10:07 AM