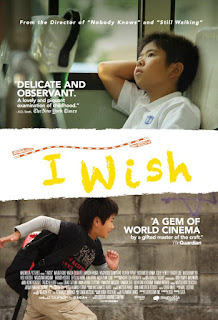 Kohichi (Kohki Maeda) and Ryunosuke (Ohshiro Maeda) are two brothers with separated parents. After a failed marriage, father Kenji (Joe Odagiri) has returned to Osaka with Ryunosuke to try and find commercial success with his band. Mother Nozomi (Nene Otsuka) has moved into her parents' home in Kagoshima with Kohichi. A new bullet train service is announced between the two cities. Kohichi hears a rumour at school that when the two train pass each other for the first time, the combined energy between them will make wishes come true. Kohichi formulates a plan to travel to the mid-point of the new train line, see the trains pass one another, and wish in that moment for his parents to reunite.

I Wish, from writer/director Hirokazu Kore-eda, is one of those remarkable films where a brief plot synopsis completely fails to express its quality. This is a wonderful family drama packed with perfectly observed realist moments. It all feels real: the story, the characters, the various conflicts and challenges. It shows remarkable depth from beginning to end. It makes you wish its young protagonists so much happiness.

It's fairly clear from the outset that I Wish is not some kind of fantasy story. Kohichi might pin his hopes on the idea of his parents reuniting, but it's pretty obvious that such a reunion is not likely. Indeed, younger brother Ryunosuke doesn't even seem that keen for such a reunion to happen. Kohichi, through brief dreams and flashbacks, remembers being part of a loving family unit. Little Ryu just remembers his parents fighting all of the time. The boys talk to one another daily over the telephone, and it's a beautifully observed relationship. Kore-eda cleverly cast real-life brothers in the roles, and re-drafted his screenplay after workshopping scenes with them. They really are two of the best child performances I've seen. Ohshiro Maeda is particularly great as Ryu: with his father continuing to live like some kind of university undergraduate it's Ryu who weirdly assumes the paternal role. He cleans their house unprompted, makes himself packed lunches, and even occasionally scolds his father for poor behaviour.

One of the film's most important strengths is how far it extends the narrative beyond its two young stars. It does not simply follow Kohichi and Ryu but also their friends and family. Nozomi struggles to find gainful employment, and continues to suffer emotionally from her failed marriage. Kenji runs the risk of becoming a poor father while concentrating on his band. Nozomi's father becomes obsessed with cooking a traditional Japanese sweet, in what becomes a running joke. One of Kohichi's schoolmates forms a crush on one of his teachers. One of Ryu's schoolmates auditions to become an actor while receiving constant criticism from her jealous mother - herself a failed child star. All of these gently interwoven narratives give the film an incredible strength. The climax, with a pack of children shouting out wishes to the passing trains, is a very powerful moment, inspiring smiles and tears at the same time.

This is such a perfectly formed gem of a film. Kore-eda weaves through well-crafted, wonderfully performed characters as well as wry social commentary, and manages to create something very special indeed.
Posted by Grant at 8:43 AM