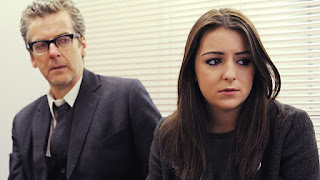 Patricia "Paddy" Meehan (Jayd Johnson) is a young woman in 1982 Glasgow. She works as a copy boy at a local newspaper, but harbours a strong desire to break through the sexist environment and become a professional journalist. When a young boy is abducted and murdered, a personal connection leads Paddy on a quest to investigate the killing for herself - even if it puts her own life in jeopardy.

The Field of Blood is a two-part crime drama based on the novel by Denise Mina, and written and directed by David Kane for BBC Scotland. It's a gripping piece of work, although to be honest it's plot is not its greatest selling point. Instead it grabs the viewer's attention with an excellent sense of place and time, and by centring on a strong lead performance by Jayd Johnson.

Paddy Meehan is a great protagonist. She's enthused and confident, but also suffers from self-esteem issues and a comparatively hostile workplace. She struggles to please her devoutly Catholic mother. The murder of a young boy hits her personally because the alleged perpetrator - a 12 year-old boy - is her cousin. This personal connection makes reporting on the story a complicated affair, and the series doesn't shy away from the ethical issues regarding the media, the police and how the two intersect in these kinds of situations.

The 1982 Glasgow setting seems ready-made for this kind of story. It has a sort of oppressive grey quality, both bleak and vaguely threatening. It's a visibly rough environment, and Paddy has to be a strong character in order to live in it. The dull, run-down aesthetic feels soaked in cigarette smoke and whisky. Most of the supporting cast seems run down and crumpled, somehow.

The supporting cast are all very strong, although it's odd that both David Morrissey and Peter Capaldi are prominently credited without really playing too large a part. Capaldi in particular seems wasted: he plays his character brilliantly, but it feels as if there should have been more to his personal story. That's an issue with the series in general: at two one-hour episodes it feels a little truncated. I suspect a third episode, and a careful spacing-out of the various plot points, would have created an even more evocative piece.

This series wasn't a huge success, but a sequel serial was produced in 2013. I'm rather keen to track it down. The story may have been slightly generic, but Paddy Meehan is too appealing a character to ignore.
Posted by Grant at 9:35 AM