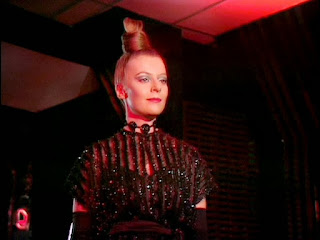 Vila (Michael Keating) successfully intercepts a message from Servalan (Jacqueline Pearce) to the notorious professional killer known as Cancer, agreeing to a contract for Avon's entire crew to be assassinated. Rather than wait for the assassin to come to him, Avon (Paul Darrow) goes looking for Cancer himself at a remote slave trader's community beyond the Federation's control.

So "Assassin" is, like many Blake's 7 episodes, a story split into two halves. The first, which sees Avon infiltrate a slaver's market to gain intelligence on the mysterious Cancer, is reasonably entertaining. The second, which sees Avon, Tarrant (Steve Pacey) and Soolin (Glynis Barber) hunt down Cancer in the bowels of his own ship, is positively risible. What's a viewer to do?

Avon's adventures down on the planet Domo are not without their charms. It's all highly superficial, ridiculously camp and rather silly, but there are some good lines of dialogue and a fairly promising guest performance by Richard Hurndall (later to replace the late William Hartnell in Doctor Who's "The Five Doctors"). It is ridiculously costumed, of course, and echoes some of the more bizarre design choices of Season 2, but as a set-up it all goes by okay.

The problem is that once Avon, Tarrant and Soolin teleport over to Cancer's seemingly broken-down ship, nothing else in the episode makes a lick of sense. It's all a trap, of course: who we're told is Cancer is actually an actor. Who we're told is his enslaved victim is actually the real Cancer, actually a woman in what is intended as a shock twist but which falls flat on its face through poor scripting and one hell of a bad performance. As I said, however, none of it makes sense anyway: Servalan has an audio feed of the entire ship, and boasts that she has heard everything that has happened, yet she doesn't hear Soolin tell Tarrant that she's worked out Cancer's plan and she doesn't seem to hear them rushing to Avon's aid. As for Cancer herself, she boasts about killing Soolin with her deadly shape-shifting spider - a highly unconvincing mechanical prop - but also has it with her while boasting, so if she's gone and retrieved it from where she sent it to kill Soolin she'd have seen there wasn't a body.

While Avon, Tarrant and Soolin run circles trying to find Cancer, writer Rod Beacham produces some awful character work: Tarrant becomes obsessively protective of the meek Piri (really Cancer), defending her against Soolin's increasingly weary disdain at her shrieking and Avon's standard contempt for women in general. The episode makes Avon out to be weirdly petty, and Tarrant out to be ridiculously stupid. It's only really Soolin who survives intact, showing her now-standard level-headedness and dry delivery.

The episode's worst element is Cancer herself, played by Caroline Holdaway. "Bad pantomime" doesn't quite cut it. In a series that has often been hit by actors clearly playing their parts for laughs and refusing to treat their roles seriously, Holdaway manages to deliver the most unconvincing and weirdly lazy performance of the lot. Her death scene involves what is likely the most unconvincing and strange scream I think I've ever witnessed. It doesn't happen often, but occasionally a film or television episode will be cursed by some acting so dreadful that it drags the entire enterprise down with it: "Assassin" is one such episode.

This is definitely a terrible episode, but as a mild sort of defence it is definitely a more watchable kind of camp terrible than, say, "Animals" was. It is still awful though: seven episodes in, and Season 4 has only managed two decent episodes. The quality ratio drops again to just 29 per cent.
Posted by Grant at 5:03 PM