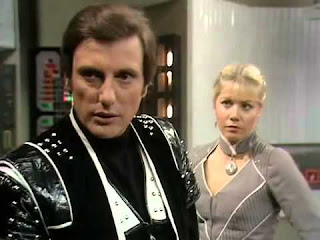 As part of his plan to recruit scientists to his cause, Avon (Paul Darrow) dispatches Tarrant (Steven Pacey) and Vila (Michael Keating) to retrieve the cyberneticist Muller (John Westbrook). When Muller unexpectedly turns violent, Vila is forced to kill him. On the way back to Xenon Scorpio begins to suffer malfunctions, putting Tarrant and Vila's lives in danger.

"Headhunter" marks a sharp contrast to Season 4's earlier episodes. It is a fully blown horror story, packed with murder, walking corpses and a growing threat to all human life in the galaxy. It is the third and final script for the series by Roger Parkes ("Voice from the Past", "Children of Auron"), and it is far and away his best.

The episode's central revelation is a fantastic twist: that Muller created an android capable of manipulating and taking over all other computers, and that his own creation then murdered him and took his place to get close to Orac. It's a wonderfully macabre moment when it becomes clear that the android not only murdered Muller but somehow ripped his head from his neck and has been wearing it as a disguise. John Westbrook does a fantastic job of playing the android. From the get-go it's clear that something is wrong with Dr Muller, even if it's not entirely clear what it is.

As with earlier Blake's 7 episodes "Headhunter" feels very much like a pair of linked sections rather than one single storyline. In the first section, tension is slowly built as Tarrant and Vila's mission to rescue Muller goes wildly off the rails. First Muller turns violent over a mysterious black box Tarrant took from his laboratory, then Vila accidentally kills him, then the ship becomes more and more hostile to its crew each time Vila attempts to open the box. It's an effective mystery, and a nice piece of deflection - making the contents of the box appear to be the cause of the problem rather than its solution.

In the second half a decapitated android stumbles around Xenon Base in a hunt for Orac, with Avon and his crew effectively standing in the way as collateral damage. Orac, meanwhile, cannot be found, having convinced Soolin (Glynis Barber) to deactivate him and to hide him out of sight.

This is a great episode for Soolin: she gets all of the funny lines, and once again presents herself as the most grounded and sensible member of the crew. Tarrant and Dayna both get some decent scenes as well, and Vila even gets to work cracking locks instead of standing around being a humorous alcoholic. Paul Darrow's performance as Avon is getting particularly over the top at this stage. It's a genuinely odd performance for the rest of the series: clearly over-acted and theatrical, but in a weirdly watchable and entertaining way. We even get to see the usually cold and unflappable Avon lose his temper.

This episode is an effective horror story with a neat twist and some solid science fiction ideas underpinning it. It's a refreshing change from the string of poor episodes that has dogged Season 4 so far, and with two good episodes out of six it pulls the season's quality ratio up to 33 per cent. Still low, but improving.
Posted by Grant at 9:56 AM