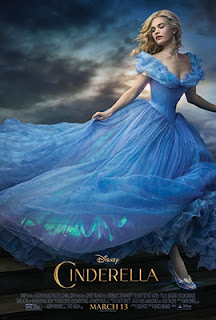 Walt Disney Pictures are currently on a roll in terms of adapting their extensive back catalogue of classic animated features into live-action films. The current wave seemed to be kicked off by Tim Burton's phenomenally successful Alice in Wonderland, and has been followed by the alternate take on Sleeping Beauty, Maleficent, and now Kenneth Branagh's fresh version of Cinderella.

Actually fresh is probably the wrong word. This is by far the most conservative of Disney's live-action adaptations to date, and pretty much takes the 1950 animated film and translates it with a fair amount of fidelity and respect. It certainly doesn't make any significant changes to the narrative or the characters, or take any risks in terms of tone or aesthetic.

The result is a film that certainly entertains, but also to an extent underwhelms. It's effective, but only to a satisfactory extent and certainly seems unlikely to be remembered as any sort of significant work.

The film is certainly impressively cast. Lily James is a striking and earnest protagonist. Richard Madden cuts a striking figure as the Prince, Derek Jacobi is appropriately wise and authoritarian as the King, and Stellan Skarsgard engaging as always as the political Grand Duke. Casting Cate Blanchett as Lady Tremaine, the villainous wicked stepmother, is a master stroke. She does an extraordinary job of being cruel and dismissive without resorting too much to over-the-top villainy. Helena Bonham Carter gets an extended cameo as Cinderella's fairy godmother, but it's a slightly strange and mannered performance that does give the impression that Carter is having a little more fun that her audience.

The film's design is also wonderful. Dante Ferretti's production design and Sandy Powell's costumes are richly developed and gorgeous to see. The whole film has a storybook quality that matches its relatively simplistic plot and characters, and it is all in all a rather charming piece.

Why, then, does it seems like a disappointment? I think it ultimately comes down to the film's refusal to take any risks. This is Disney's Cinderella performed live, for better or worse. The animated mice of the 1950 film return, this time created using computer-generated effects. Lucifer the cat gets to make a return appearance, albeit a brief one. The storyline is as simple as what you'd find in an old cartoon.

Of course it's been a full 17 years since Hollywood's last major attempt to tackle the Cinderella story in a live-action film. That version, Andy Tennant's 1998 film Ever After, was an excellent film that gave the story a more realistic grounding by removing all fantasy elements and setting in a realistic - albeit fictional - version of Europe. There was an edge to Drew Barrymore's Danielle (it even gave Cinderella a proper name), and a great deal of well-earned warmth and humour. It also benefited from a fantastic performance by Angelica Huston as the wicked stepmother Rodmilla de Ghent that managed to be believable and yet astonishingly cold ('Was there ever a time that you truly loved me?' asks Danielle, to which Rodmilla asks 'How can one love a pebble in one's shoe?').

Ultimately that's my biggest problem with Branagh's attempt. Despite carefully adapting the Disney animation it's actually Ever After of which I am constantly reminded, and in every scene and story beat it's Ever After that comes out as the superior version. If you choose to remake a film, or re-adapt an old story, it's inevitable that your new work will be compared to the old ones, and it's in that comparison that Cinderella consistently comes up short. It's not a bad film - in fact it's a very enjoyable one - it's simply that you can see the potential in the cast and crew and wind up wishing they'd somehow made something more original.

Disney are continuing with their live-action adaptations, with both The Jungle Book and Beauty and the Beast well into production, and new versions of Dumbo and Mulan already well into development. I really hope future attempts take the lead of more adventurous adaptations like Maleficent than in the safer territory taken by Branagh's film.
Posted by Grant at 7:42 AM