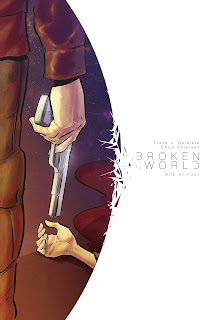 Three months after an asteroid was supposed to wipe out all life on Earth, a few pockets of abandoned humans struggle to rebuild their lives. For Elena Marlowe, left on Earth when her family was taken off-world, that means killing a charismatic cult leader to satisfy the military leader who's her only chance for meeting her family again.

The final part of a miniseries is the hardest to do well. You've got to pull your narrative into a climax, and you've got to pace it really well. Too soon and it will feel abrupt and cheated, with a long, tedious epilogue dragging things out. Too late and there's no room for an epilogue at all, and no proper sense of closure. Broken World #4 does it perfectly. It keeps driving along until its final pages, and then wraps things up beautifully while still keeping one eye on a sequel series somewhere down the road. Christopher Petersen's artwork is great, with the sort of DC Vertigo style that really seems to work with these character-centric science fiction comic books.

I really hope there is more for Broken World in the future. It's been a great miniseries with a strong, appealing lead character. Fingers crossed. (5/5)

Under the cut: reviews of Jem and the Holograms and X-O Manowar.

Jem and the Holograms #6

This continues to be an unbelievably sweet and likeable comic book. I love that its characters are so beautifully designed in all different body shapes and sizes, not to mention sexuality, all in an all-ages context. I absolutely adore the way Sophie Campbell draws the musical numbers, finding ways to express pop music in purely visual terms. This book is so much better than its source material might suggest: whoever thought a spin-off comic of a 1980s children's cartoon could be this exceptionally produced? (4/5)

Vine refugees have attempted to settle on Earth. The human governments are fearful of further Vine attacks. There are some on both sides for whom conflict would be preferable to peace, and an old enemy working behind the scenes. Part 2 of the "Exodus"arc keeps the momentum going nicely, and setting things up for some high drama in the issues to come, although it's perhaps not as entertaining on its own merits. This feels like one of those issues that's required to move an overall plot along rather than to be a great issue in its own right. Enjoyable, but perhaps not as enjoyable as it could be. (3/5)
Posted by Grant at 11:50 PM