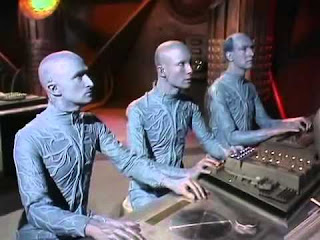 Not just any episode either, but "Ultraworld" - the episode so cool that British electronic group The Orb named an entire album after it. It sees the Liberator stumble upon a massive artificial planet whose inhabitants lure passing starships in order to download their entire mind onto computers while feeding their bodies to a giant pulsating brain at the planet's core. Cally (Jan Chappel) is taken first, and then Avon (Paul Darrow). Vila (Michael Keating) is trapped on the Liberator - can Tarrant (Steven Pacey) and Dayna (Josette Simon) save the day?

I adore "Ultraworld" pretty much because it's one of the silliest things Blake's 7 ever produced. It's knowingly absurd. You can see it on the actor's faces. It's an episode in which the villain is an enormous brain, served by three bald blue men in jumpsuits - one of whom looks hilariously like the electronic musician Moby, and another like Smashing Pumpkins lead singer Billy Corgan. Once you've got Moby and Corgan in your head their scenes just get funnier and funnier. Then again I find pretty much everything in "Ultraworld" pretty funny. It's an episode that requires you to simply let go of common sense and enjoy it on its own peculiar merits.

Season 3 seems to have been the year for weird "out there" episodes of Blake's 7. "Dawn of the Gods", "The Harvest of Kairos", "Sarcophagus", and now this - arguably the weirdest of them all. It's nowhere weirder than when the Ultra (the blue guys) lock Tarrant and Dayna up and demand they demonstrate how humans have sex. It's the most appalling science fiction cliché, yet somehow thanks to some good dialogue, amiable performances and one stand-out joke, they manage to make it work.

This is a great episode for Tarrant and Dayna. Tarrant is back to being more of a headstrong, dashing space captain, and Dayna remains a competent but relatively inexperienced combatant. Their dialogue is bright and witty, and both Pacey and Simon appear to relish being given something worthwhile to perform for a change. The script is by Trevor Hoyle, the science fiction author who had already novelised several episodes of Blake's 7. This was his only script for the series, which to be honest may have been for the best: I find this episode an absolute riot, but it's difficult to claim it fits the general template of Blake's 7 overall. The Federation gets a mention - and apparently Servalan is expanding its borders rapidly - but they don't appear.

I will defend this episode to the end of days. It's the sixth good episode out of ten so far for the season, giving Season 3 a current quality ratio of 60 per cent.

I wasn't joking about The Orb, by the way. Their 1991 ambient album The Orb's Adventures Beyond the Ultraworld even included the track "A Huge Ever Growing Pulsating Brain That Rules from the Centre of the Ultraworld".
Posted by Grant at 5:02 PM