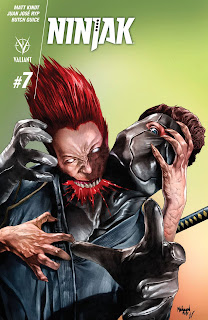 Ninjak #7 continues the British agent Colin King's mission to track down and destroy the secret organisation known as the Shadow Seven. He has taken over the arms dealing outfit Weaponeer, a subsidiary of the Seven. Now he's travelled back to London to take out one of the Seven - the surgically modified operative Sanguine.

There is a formula for this title that Matt Kindt has been following through this particular volume of Ninjak, one which jumps back and forth between over-the-top action sequences and thoughtful flashbacks into King's youth. It's a simple but very effective technique.

Juan Jose Ryp's artwork is beautifully composed and enhanced by Ulises Arreola's exceptional colours. It is, however, sometimes quite confrontational in terms of the frank way Ryp expresses violence and, by the issue's climax, actually somewhat grotesque. I think I like it, but I also felt somewhat surprised at just how dark and garish into all became.

Ninjak is an odd sort of comic book. It has a premise and a character that screams 1990s-style excess, and is precisely the sort of book I usually avoid. It's to Kindt, Ryp and Arreola's credit - not to mention the editors at Valiant - that this book is still pretty entertaining. (3/5)

Under the cut: reviews of Gotham Academy, Rebels and Unity.

Gotham Academy was initially pitched as a sort of "Hogwarts of Gotham", which was a pretty neat hook. It's by-and-large been pretty entertaining stuff as well, with an appealing cast of characters and growing links to the Batman mythos, as well as neat animation-esque artwork from Karl Kerschl. This latest issue, however feels less like Harry Potter and more like Scooby Doo. There's a school rehearsal for MacBeth, and Olive thinks she's seen the ghost of her mother - but who could it really be? This is a fun all-ages series, but this specific issue felt decidedly sub-par. (2/5)

Rebels has been a great historical drama, following the lives of a young married couple at the outset of the American Revolution. One of the real highlights of the book is Andrea Mutti's scratchy, realistic and impeccably research artwork. The period detail in both the art and Brian Wood's script is great, and highly evocative. I was surprised by this new issue, though, which wraps up the first arc by jumping forward several years to the end of the war and the reunion between Seth and Mercy Abbott. I thought from the publicity that this whole series was going to focus on the Revolution, and the revolution is over: where on Earth do things go from here? (3/5)

Every time I see a book with five inkers (every artist listed above except for Jose Luis) I worry about how rushed an issue has been. To Valiant's credit, you cannot tell: this is a great climax, with the combined Unity team making a final stand against the villainous War Monger. It has a nice epic tone, great moments of character, and a beautifully nuanced ending. I've said many times before, but it's always worth repeating: if you're into superhero comics, and DC and Marvel aren't scratching your itch, Valiant is doing some of the best stuff on the market at the moment. (4/5)
Posted by Grant at 10:48 PM