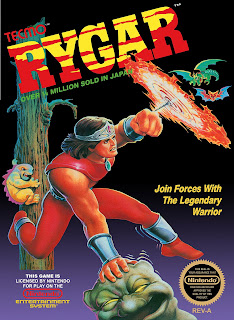 Warriors of Argus was a side-scrolling action game produced by Tecmo, and released into Japanese arcades in 1986. Internationally it was released as Rygar, and its combination of platforming action and its fantasy setting made it a popular hit. When Tecmo ported the game from arcades to the Famicom console, however, they didn't just directly translate it - they completely up-ended and revised the entire game. Where the arcade original was a pure action title, the console remake introduced many elements of the action role-playing game (RPG). The player could explore a more open fantasy world, with separate areas opening up once the player had powered up his or her character sufficiently. It was a hit in Japan when released in 1987, and then a hit in the USA and Europe when released in 1988 and 1990 respectively. 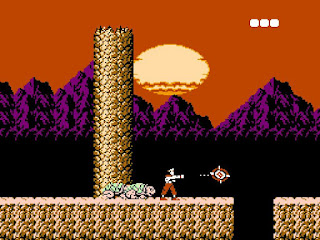 The changes to Rygar are what made it such an exceptional game. The arcade version was a fun but essentially throwaway brawler. The NES/Famicom edition required the player to travel around a fantasy landscape, slowly collecting equipment that would enable them to access additional areas. A grappling hook let you travel to one location, while the crossbow might help you reach another. The scale was, at the time, genuinely impressive.

There was, however, one problem with Rygar and it was admittedly a big one: there was no means of saving the game. It was released without the expensive battery back-up used in some NES cartridges, and didn't even use a password mechanism that had been popular with many earlier games. Given its expansive world and lengthy gameplay, it meant Rygar was a game you needed to start playing first thing in the morning and often not finish until very late at night. Some gamers were known to leave their console running overnight to finish playing the game the next day.

Despite its popularity at the time, and a general cult status among NES players, it took until 2002 for Rygar to finally get a sequel. Rygar: The Legendary Adventure was released for the PlayStation 2. Despite positive reviews - and a belated Wii remake in 2008 - further follow-ups did not eventuate.
Posted by Grant at 7:04 AM