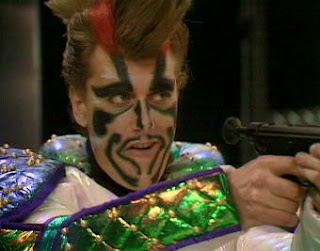 A disastrous attempt to sneak past a Federation border leaves Scorpio in dire need of a new stardrive. Avon (Paul Darrow) believes he's found it on the planet Casper, where the noted Federation physicist Dr Plaxton (Barbara Shelley) is developing the galaxy's fastest new engine for the villainous Space Rats.

Oh Space Rats. I don’t think there’s anything in all four seasons of Blake’s 7 that more wonderfully reveals such a middle-aged – and middle-class – fear of youth culture. They are essentially punks in space, except they’re punks as envisaged by someone who’s never been one, never met one, and never really had a clue about what they’re like. It's also presented several years too late, attempting to capitalise on the punk craze precisely when Britain's youth had moved on to becoming new romantics instead.

The Space Rats all speak with working class London accents, in sharp contrast to the received pronunciation of the regular cast. Their leader Atlan, who makes a point of explaining that he’s not a Space Rat himself but simply leads them, speaks with a weirdly generic foreign accent. They’re obsessed with speed and violence, and speak with their own slang terms - one of which unfortunately duplicates a nasty racial epithet. I don't know what it was that made writer James Follett so despise the working classes or the youth of Britain, but his script drips with disdain for both.

Of course Follett's unfortunate script is compounded by some really bad costume and make-up work. Space punks apparently means glam rock punks, replete with face paint, shimmering paster outfits and weird plastic fins glued to motorcycle helmets. They are utterly ridiculous and unconvincing, and their presence pretty much derails the entire episode. It's not helped by Barbara Shelley's weirdly mannered performance as Dr Plaxton, the inventor of the photonic drive and the performer of the most unconvincing death scream in the history of British narrative television.

So does anything work? Sure. Paul Darrow does a great job of playing an increasingly callous and manipulative Avon. Here he puts Scorpio in harms way and misjudges badly. He then deliberately sends Dayna and Vila into a trap so as to divert from his own activity. Soolin (Glynis Barber) challenges him on it, but he's entirely unperturbed by her accusations. His actions in the episode's final scene are just the cherry on top. There's a genuine development in Avon's personality here, and it's one that sticks. He's not simply callous any more; he's becoming practically sociopathic.

I really do like Soolin, by the way. She's an oddly underwritten character, but Barber works what she's been given remarkably well. The result is a level-headed professional in a world of fairly camp, haphazard rebels.

Oh but those Space Rats. "Stardrive" is one of those bad episodes of television that's paradoxically so awful it's entertaining. Don't be fooled though: it really is unbelievably awful. Four episodes in, and Season 4's quality ratio is a worryingly low 25 per cent.
Posted by Grant at 8:11 PM