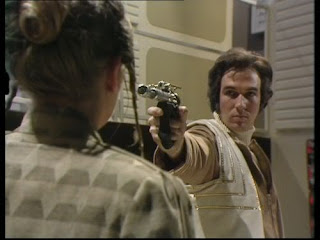 The independent planets of Teal and Vandor have declared war. Rather than launch their battle fleets at one another, they have each appointed a single champion. Together they will duel until one dies, and the victor's government will declare victory over the entire war. The Liberator crew arrive on the neutral planet to observe the duel - a huge celebratory festival is attached - only to discover that Servalan (Jacqueline Pearce) is acting as the neutral arbiter, and Tarrant's older brother Deeta is Teal's appointed champion.

"Death Watch" was a last-minute script thrown together by Chris Boucher when an earlier commissioned script by a writer named John Fletcher fell through. You can't tell: Boucher throws in family drama, high concept science fiction and diplomatic conspiracies, as well as pushing along multiple character arcs for the season overall, and in doing so pretty much writes the best episode of Season 3. It's between this and "City at the Edge of the World", and pretty much personal taste is going to dictate which episode you prefer. For me, it's this.

This episode is strikingly directed by Gerald Blake, who had previously done some pretty decent work on other BBC series like Doctor Who and The Omega Factor. There's a central gunfight scene here between Deeta Tarrant and the Vandor champion Vinni that is honestly as well shot and edited as any action film of the period, including some unexpected and marvellous crane work. The inventiveness doesn't stop on location: even the studio work feels remarkably sharp and cinematic, notably a wonderful shot of Avon taken from inside Orac's electronic workings.

Steven Pacey pulls double duty as Del and Deeta Tarrant. As Deeta he does look rather ridiculous in a fairly unconvincing wig, but his performance is rock-solid - clearly related to Del but distinct in personality and bearing as well. In an unexpected master stroke, the brothers never actually meet: Deeta is dead before Del can get a hold of him, and it's up to Del to take revenge by the episode's end. The moment where Del realises his brother has died is the single-best piece of acting Pacey has given in the series so far, in large part because he's finally been given something to do.

Servalan gets two great scenes, one with Dayna (Josette Simon) and the other with Avon (Paul Darrow). Dayna of course desperately wants to kill her in revenge for Servalan's murdering her father, but she's under orders to simply create a diversion instead. It's a nice little scene regardless, with the Federation President apparently genuinely scared she's about to get her head blown off.

Her scene opposite Avon is even better, cementing the odd, relatively sick pseudo-romance between the two. It's a great moment that builds cleverly on their encounter all the way back in "Aftermath": Servalan doesn't actually consider Avon a threat to her, but rather a potential ally and lover. For his part Avon seems attracted to Servalan while despising her at the same time, but then he has consistently demonstrated a pretty ambivalent attitude towards women. I like this progression in Avon and Servalan's relationship because it's categorically not the relationship she had with Blake. The ground has shifted considerably as this season has gone on, and it's really not the same series that it was a year earlier.

If all of that wasn't enough, Boucher also squeezes in some pretty harsh commentary on popular media, decrying the people of Teal and Vandor for the manner in which they all enthusiastically watch the blood sports play out. 'Murder without guilt,' says Tarrant at one point, 'death without loss.'

"Death Watch" is a great combination of action, character and science fiction. Not only do I think it's one of Blake's 7's best episodes, I think it's also possibly its most underrated. After the disappointment of "Moloch" it is such a breath of fresh air. We're 12 episodes through Season 3 with seven good episodes. The quality ratio pops back up to 58 per cent.
Posted by Grant at 8:46 AM