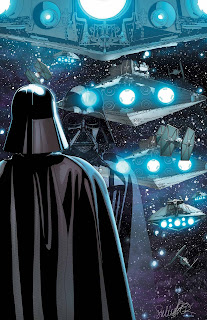 With everything Star Wars heating up around the world these days, it would be easy to get overwhelmed and run away screaming. Certainly Marvel are running riot at the moment with two regular monthly titles and a string of miniseries, including one that debuted this week about the aftermath of the Battle of Endor. There's even a one-shot coming down the line from the creative team of Starman, showing one of C-3PO's adventures between Return of the Jedi and The Force Awakens.

I'm keeping things at a manageable size by focusing on just one or two of the books. I've been reading the wonderful Lando miniseries, and I've been reading Kieron Gillen and Salvador Larroca's outstanding Darth Vader. We're up to issue #9 now, and it's remarkable just what a wonderful and dramatic book it is.

In the aftermath of Star Wars, Darth Vader has learned that the pilot who blew up the Death Star is named Skywalker. Obsessed with finding out if it is his presumed stillborn son, he has started his own private investigations without the Emperor's authority. To fund his secret mission he has engineered a heist of valuable metals from a Star Destroyer, only now he has been assigned to help investigate that crime and bring its perpetrators to justice. Yes, in a brilliantly Philip K Dick fashion, Darth Vader has been assigned to track down and arrest himself.

This is a brilliantly twisted book, taking all of the standard space opera tropes in which the Star Wars saga indulges, but flipped to focus on bad people instead of good. Let's be honest: the villains are always the more enjoyable characters anyway. (5/5)

Under the cut: reviews of Action Comics, Catwoman and Ms Marvel.

Superman continues to struggle with failing powers while Metropolis is attacked by the mysterious Wrath. There are citizens getting taken over, gaining super-strength and running rampage - and even Superman's latest friend and ally Lee may be under control. To be honest this issue felt pretty scattered and untidy. From panel to panel it all felt a little difficult to follow and properly engage with the action. This has been a regular problem with Pak and Kuder's run: some issues they knock it out of the park, and then in the very next issue they seem to struggle. (2/5)

Basically all DC fans should be reading this book. It's got multiple female characters who honest-to-god talk to one another. It's got the dark Gotham City setting so many of us adore. It's got Catwoman, one of the most iconic characters in the history of American comic books, and she's being written and drawn in a way that's powerful, entertaining and not even a tiny bit skeezy. It's using all of the dressings of the Batman comic line to tell a complex organised crime story. It co-stars Spoiler, a character that I'm pretty sure more people on the Internet were demanding return than are actually reading her adventures right now. This has been an outstanding book for almost a year now, but this issue in particular was damn-near faultless. (5/5)

The world is about to end, and Ms Marvel has teamed up with her idol Captain Marvel to save her brother's life. This has always been a beautiful series: rich in character, warm and likeable in tone, and brightly illustrated by Alphona and Herring. This issue feels more momentous than most. It's probably the melancholic realisation that the whole of reality is about to be wiped out, but Kamala Khan's troubled teenage life seems particularly troublesome this month. The dialogue is great, and there are multiple highlights. It's annoying that this book, which simply runs from strength to strength, has been roped into Marvel's big Secret Wars crossover and then is getting cancelled and replaced by a new volume. It's testament to Wilson's writing that the issue remains as brilliant as it is despite all of the editorial interference on the story. (5/5)
Posted by Grant at 5:01 PM