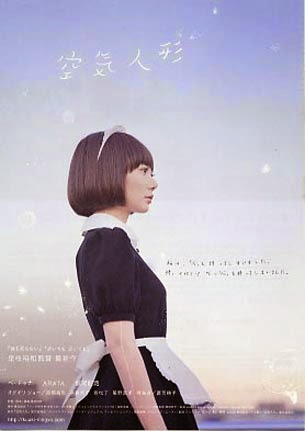 An inflatable sex doll spontaneously comes to life. When her owner heads out to work each day, Nozomi sneaks out herself. She meets the various people living in her neighbourhood. She finds herself a job at the local video library. She even tentatively begins a romance with a co-worker. Through her adventures, she tries to work out what it is to be human.

Sadly the answers she finds to her philosophical questions are ultimately not kind ones. Air Doll is a very strange movie. It begins with a fairly skeezy-sounding premise and certainly has more than its fair share of on-screen nudity. By the halfway point it's become something rather bright and wonderful, displaying a sort of naive optimism that wouldn't be out of place alongside Jean-Pierre Jeunet's Amelie. By its final act it's overwhelmingly depressing. I've seen the film described elsewhere as a tragedy - that overplays the emotions at work here. I'm not sure what the correct word is: disappointment comes to mind, although it's not a disappointing film.

This 2009 film is the work of writer/director Hirozaku Koreeda, and is adapted from a manga by Yoshiie Goda. I haven't seen any of Koreeda's other films, although he has directed several highly acclaimed ones that are on my to-watch list - things like I Wish, Like Father Like Son and Nobody Knows.

This film is beautifully shot and for the most part has a very gentle, amiable tone to it. It does have a very slow pace, however, and I can't help but feel the story would have been better served in 90 minutes than in the 125 that Koreeda takes. This is particularly the case given the sharp change in tone the film takes in its final 45 minutes - it's almost as if you're watching a different movie.

Nozomi is played by Bae Doona, a Korean actress who's impressed me quite a few times over the years in films like Sympathy for Mr Vengeance and The Host (she's the one with the bow). She has a pretty difficult job expressing a pretty unbelievable character, and if the sad final act works it's because she's invested so much heart into it. The supporting cast are solid, particularly Joe Odagiri who cameos as Sonoda, the sex doll designer who created Nozomi in the first place. His role is very brief, but he made an enormous impact.

I'm happy I watched this, but I'm not entirely sure I liked it. It defies expectations: a slightly disturbing premise that isn't fulfilled, but a warm middle act that it then extinguished, and a depressing coda that leaves the viewer unfulfilled. If this is Koreeda's take on the meaning of life, he must be a hell of a bummer at parties.
Posted by Grant at 9:24 AM