Professor Layton and the Eternal Diva (2009) 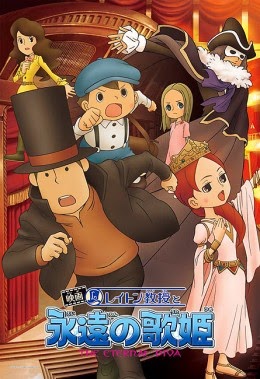 Will there ever be a great motion picture adapted from a videogame? Certainly there have been a few reasonably enjoyable ones, and a fair share of watchable yet critically flawed attempts, but it seems generally agreed that the vast majority of game-to-film adaptations are pretty dire. One of the more recent attempts is Professor Layton and the Eternal Diva, released in Japan in late 2009 and based on the popular puzzle-based adventure games for the Nintendo DS.

I entered the film with fairly high hopes – it is an animated feature, utilising the same animation and design work as the videogames it’s based on, and supervised by the original game design studio Level 5. The characters in the games are remarkably appealing, and they already boast a very film-like aesthetic and narrative. Sadly The Eternal Diva doesn’t quite live up to its promise, but it does remain an enjoyable distraction.

After a bizarrely inaccessible and confusing opening ten minutes – which includes two flashbacks, one nested inside the other – the film settles down to exploring a strange mystery. Archaeologist and renowned puzzle solver Professor Hershel and his apprentice Luke Triton travel to view a new opera performance whose composer, Oswald Whistler, has just adopted a young girl claiming to be the reincarnation of his dead daughter. Soon the situation explodes into death-defying escapes, radio-controlled sharks, a theatre that transforms into a cruise liner, a mysterious Atlantis-like island and – potentially – the secret to eternal life.

It feels like there are a number of influences at work. One of the obvious ones is Pokemon. The Eternal Diva’s animation style reflects many of the recent films from that long-running franchise, with its slightly jarring combination of cel animated characters and computer-generated cars, ships, planes and buildings. It looks like the film was produced with a comparatively small budget, which makes a lot of its occasionally ropey looks forgivable. The character design remains in line with the games, presenting a nice, unusual look. While this film is certainly an anime, it doesn’t always conform to the expected design conventions of that media.

Another influence, or at least a strong similarity, is the 1980 television series Astroboy. As the film progresses its tone and story begin to shift quite closely to the well thought-out, well told tragic kind of storytelling that became that series’ hallmark.

The voice cast is identical to the games, in both the Japanese and English language versions, which is a nice touch – although it must be said Maria Darling’s performance as Luke in the English language version grates as badly in the film as it does in the games. One impressive aspect of the film is the way in which solving puzzles, the core component of the source material, has been so effortlessly and smoothly incorporated into the film story. More than that, they are presented in such a way that the audience has time to work out the solution to each puzzle as they watch the film. This aspect alone makes The Eternal Diva one of the most accurate videogame adaptations ever made.

Level 5 announced plans to continue the Professor Layton films as an annual event, something already done by the likes of Pokemon and Doraemon, but to date there hasn't been a sequel. As it's now been five years I assume there's unlikely to be one. I did think it was a good plan: The Eternal Diva boasts good characters, a nice visual aesthetic and a wonderful tone. With a slightly tighter script and a less confusing beginning, future instalments should make for fantastic family viewing. As a standalone feature The Eternal Diva is an enjoyable, but flawed film. It’s good to see family-friendly anime getting released outside of Japan; usually we get swamped with the more adult ones.
Posted by Grant at 7:28 AM