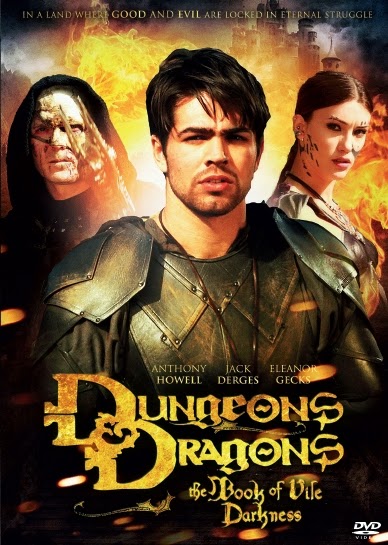 First there was 2000's Dungeons & Dragons, a hilariously awful movie that made quite a bit of cash purely by being the right film at the right time. The Lord of the Rings was coming, everybody was getting rather excited, so Warner Bros figured they'd give an aspiring filmmaker named Courtney Solomon the chance to adapt his favourite role-playing game to the big screen. It had a few big names in it - Jeremy Irons, Thora Birch (pretty much killing her career stone dead after such a promising break in American Beauty) and Marlon Wayans - and while not hugely expensive had enough of a budget to avoid entirely embarrassing itself. Most of the embarrassment came from the direction and the really, really awful script.

Five years later a UK/Lithuania co-production (no really) saw the original film get a sort-of sequel: the only actor to return was Bruce Payne, who played Jeremy Irons' henchman in the original. This production managed to feel a bit more authentic in terms of adapting the game, and had an ordinary but not shockingly awful screenplay. It was a pleasant D-movie distraction: hardly worth hunting down, but enjoyable enough if you were addicted to elves and dragons and had a Sunday afternoon spare. Personally I'm an absolute sucker for low budget high fantasy cinema. I go into every movie with a lot of hope, and go out of them hoping the next one will be better.

Someone will correct me I'm sure, but I think this is the first feature film ever adapted from a role-playing game supplement. The Book of Vile Darkness isn't just a name, you see, it's a rulebook filled with additional bits and pieces to add into your Dungeons & Dragons game. The film is filled with elements from the rulebook, so regardless of the film's quality it's going to be geek-out heaven for the average D&D obsessive. The book's writers even get an onscreen credit, which is more respect that Marvel Studios usually show their creators.

As for the film? It's pretty dreadful. I found it difficult to remember any of the characters names, so they tended to be assigned code-names. "Pretty Boy" is the last survivor of an attack where evil minions kidnap his father, forcing him to team up with a wandering party of evil adventurers to infiltrate the enemy stronghold and get him back. The adventurers include "we wanted Keira Knightley but clearly couldn't afford her", "Danny Dyer was busy" and "Mhahahahaa evil bug wizard". And on it goes.

There are one or two surprising highlights: there's a CGI dragon towards the beginning of the second act that's genuinely well realised and designed, given the budget constraints, and the adventurers hunt it down inside a dungeon. It's taken three films, but they've finally made a Dungeons & Dragons movie that has a dungeon with a dragon in it. Evil bug wizard also has a neat eye on a stalk that's similarly well done.

I think there's enormous potential to make fun movies out of pulp fantasy. The plots are simple, the audiences are generally forgiving of limited budgets, and once you've established your setting and your quest you've got a blank canvas to create entertaining characters and great dialogue. I go into every fantasy film like this hoping that this is the one, and that someone's finally cracked the formula. Hercules and Xena managed it on TV 20 years ago. Sadly, based on The Book of Vile Darkness, filmmakers are still struggling - but I live in hope.
Posted by Grant at 12:48 PM