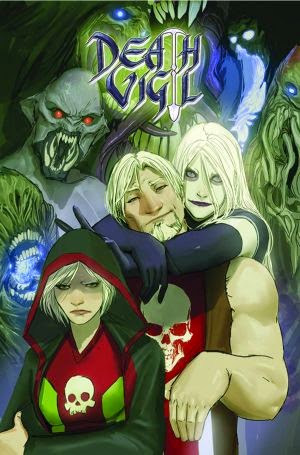 Another week, another new Image book. This one is Death Vigil, about the recently deceased getting recruited by a sexy blonde Grim Reaper to fight demons.

This is not an original comic book. It follows a path furrowed by many a preceding comic book, and gets jammed in the potholes more than once. Stjepan Šejić is drawing a long tradition in this sort of comic book, which emphasise gorgeous-looking sexy people fighting sexy monsters and villains, while sharing in witty, vaguely self-aware dialogue as they go. This is by no means the worst comic of this type that I've ever read, but you have to really like this kind of book to get anything out of it. I'm not particularly enamoured with it, so for me this book came up wanting.

On the plus side: the artwork is very expressive, with the best character expressions I've seen since Jamie McKelvie. It's also a super-sized premiere issue for the price of a standard book, so there's certainly value for money going for it. This is a bit of a two-edged sword, however, since I get the impression Šejić doesn't use the extra length to give us more plot. Rather, he uses it to tell a flabbier version of a story a better writer could tell in fewer pages.

I do think he's a fabulous artist, but a middling writer, and with time he might develop his skills and come up with something quite wonderful. For now, however, we have Death Vigil: you may like it if you like this sort of thing. (2/5)

This issue was an absolute delight, teaming Batgirl and Black Canary with the Huntress for the first time in the New 52, and reuniting Gail Simone with the cast of her acclaimed run on Birds of Prey. It also builds tremendously towards a climax for Simone's entire 30-issue plus run on Batgirl. My happiness at this issue has been dampened somewhat: firstly because of events in Worlds' Finest (see below) and secondly because a day after reading this issue DC announced Simone and Pasarin were leaving the title to be replaced by a new creative team. I've really enjoyed Simone's run, and I desperately hope she can wrap it up in one issue without feeling truncated (personally I doubt it). (5/5)

This issue actually wraps up one of the main arcs of the series, which was a bit of surprise. It can always rear its head again, I suppose, but in many ways this is a neat wrap-up to the first arc for Batman Eternal. This brings rewards and risks: on the one hand it's neat to see something tied up, but on the other I'm not entirely certain that what replaces it will be as entertaining. A final page reveal sets up this next act somewhat, and I'm a little ambivalent about it. All in all, however, this is an entertaining issue so I can't really complain. (3/5)

So finally we get to jump back a few weeks in time and find out whatever happened to the late Foggy Nelson. And, as is the way with Waid's run on this title, it's a broadly self-contained and immensely entertaining comic book. Ant Man guest stars here, with a fairly clever use of his powers, as well as yet another retro Daredevil villain I never expected anyone to want to use again. This story is typical Mark Waid: it gives you almost exactly what you wanted, yet still manages to surprise just a little bit. (5/5)

Manapul has brought such a great visual aesthetic over to this book. It's maybe not quite as inventive as the work he was doing on The Flash, but it's still extraordinarily good. I'm also enjoying the focus this story arc has placed on police detective Harvey Bullock. He's always been a favourite, and Manapul and Buccelatto are writing him brilliantly. Meanwhile the overall focus on the book seems to have shifted to more of a crime genre than all-out superheroics - and I think that really works in its favour. (4/5)

This is shaping up to be a very mixed comic book. For every aspect that I like there's another that underwhelms me. There are some beautiful moments of horror early into this issue, as past cases of the Empty Man virus are recounted, and certainly Vanessa R. Del Rey provides some great artwork, but on the other hand Cullen Bunn's dialogue sometimes feels a bit too cliched, and the overall storyline isn't quite gelling together. I'm committed to buying the third issue, but this does feel like a tiny step down from the first. (3/5)

I feel like someone needs to stage an intervention with DC Vertigo about this book's covers. Last issue it was an illustration of a fried egg on a plate. This month it's a sketchy picture of a bit of tech and a glowing portal: it might be relevant to the story, but it's hardly going to draw the reader in. Inside it continues to be a smart, slightly edgy science fiction thriller, with a very Azzarello-esque handle on the characters and highly expressive artwork. I honestly figured this book would be cancelled about now - sales are not strong - so it was a mild but pleasant surprise to see references inside to issue #14. (3/5)

This issue marks the beginning of a new direction for Dick Grayson, aka Robin, aka Nightwing. His secret identity was outed during Forever Evil, and then his death was faked to the world, enabling him to pick up his life here as a secret agent - ostensibly working for the mysterious agency Spyral but secretly still working for Batman. It's a tightly written action comic with strong artwork, and a couple of genuine surprises - including the debut of the New 52's actual Helena Bertinelli (aka Huntress). I'm not sure how long DC will hold its nerve and keep Dick in this new environment, but it certainly opens up some interesting future possibilities both here and in other Batman titles. (4/5)

Infinity Man and the Forever People #2

I'm enjoying this adaptation of Jack Kirby's old New Gods spin-offs, and it's already bringing back some nice elements from the original version. I do have two concerns, though: firstly this does feel more than a little like nostalgia running riot - I'd like to see something genuinely new and fresh come out of this book, otherwise I'm not sure there's really a point in publishing it; secondly, the panel layouts (similar to OMAC, Didio and Giffen's earlier collaboration) mean that very little is happening in each issue. I'd prefer something a bit more compressed. (2/5)

I was underwhelmed by the first issue of this sci-fi pulp comic but figured - at US$2.99 - I could afford to give it a second chance. Sadly this issue confirms all of my problems with the last one. It's quite simply not good enough for professional publication. While I appreciate the effort that must have gone into the creation of Red City, the plot is too heavily based on stereotype and the artwork is decidedly sub-par. I think I'm getting off this particular ride - Image are publishing far too many exceptional science fiction titles for anybody to waste their money on this one. (1/5)

It's weird: this comic really hit a natural end point last month, but here we are - three months from cancellation - and an all-new arc is firing up. I'm really not sure what to make of it. Princess Leia commandeers the Millennium Falcon to rescue a rebel informant, who is lost and under attack by the robotic bounty hunter IG-88. Is it bad? Certainly not. Is it necessary? I think the answer to that might be 'no' as well. I've been a big fan of what Dark Horse have done with Star Wars, but after last month ended on such a definitive note it seems weird to stumble along for another three months. (2/5)

This issue goes a long way to demonstrate why Worlds Finest slipping so far beyond my attention: I started with this book keen to read a female-oriented superhero team-up, but for the past year there's been precious little crime fighting going on, with the focus instead on a long-winded attempt to get Power Girl and Huntress back to Earth 2 and into cancellation. It's like ripping off a band aid very slowly: just yank it off, cancel the book and drop the characters into Earth 2 already. (2/5)